What to Expect When Tesla’s Model Y Rolls Out 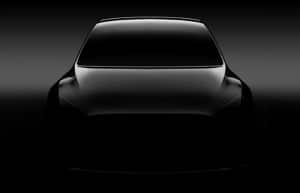 The Model Y debuts tonight and will be more expensive than the Model 3.

In a market where SUVs and CUVs have overwhelmed traditional sedans and coupes, there’s a yawning gap in the Tesla line-up that the upstart automaker intends to fill in the months ahead.

And the process will begin this evening when CEO Elon Musk pulls the wraps off the Tesla Model Y. Set to become the fourth product in the automaker’s portfolio, the battery-SUV could outsell all existing Tesla products combined, at least if a recent forecast by CEO Elon Musk proves accurate.

“We will probably see higher volumes for Model Y than Model 3, (perhaps) double,” the 47-year-old exec said during a late January conference call with auto analysts and journalists.

Not everyone thinks Tesla is in for a slam dunk. Volkswagen this week boosted the sales forecast for battery-electric vehicles by 50%, to 22 million, during the next decade. Earlier today, its Audi brand said it will have 30 all-electric models in showrooms around the world by 2025, starting this spring with the roll-out of its first BEV, the e-tron SUV. Jaguar already has the I-Pace in stores, and there is a growing list of mainstream offerings, such as the new Hyundai Kona and Chevrolet Bolt. The competition is uniformly shifting to long-range models, as Kia will do with the 2020 makeover of the Soul EV.

In a recent study, Detroit consultancy AlixPartners warned there are so many battery-electric vehicles coming that we could soon see a “pile-up of epic proportions.” 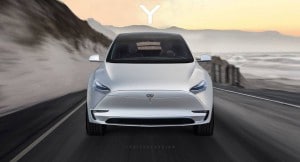 There is no shortage of ideas about what the new Tesla Model Y will look like. Jan Peisert of Peisert Design offers his take on the new ute. (Photo credit: Peisert Design)

“To me, the Model Y is the most interesting vehicle launch from Tesla to date,” said Edmunds Executive Director of Industry Analysis, Jessica Caldwell. “This will be the first time a Tesla vehicle will face serious, direct competition, and thanks to the quality issues and scandals over the last year, the brand’s halo has started to dull. Even though the Model Y will debut with promises of grandeur, if there are any chinks in Tesla’s brand armor, this vehicle will expose them.”

Tesla does stand out, even as the battery-car market is poised for explosive growth on the product side. It has a fan base that other manufacturers openly envy. During an appearance in Detroit in January, Toyota’s North American CEO Jim Lentz reminded an industry audience that the Model 3 is the only electrified vehicle with sales regularly topping 10,000 a month. And, of the 94 “electrified” vehicles on the market – including hybrids, plug-ins and pure battery-electric vehicles – only six top 2,000 a month.

Yet, if Musk is on target, the Model Y could generate sales that would position it as one of the best-selling compact crossovers on the market, whatever their propulsion system.

Fan base aside, what do we know about the Model Y at this point and what would make it so successful?

Despite his itchy Twitter finger, Musk has been unusually circumspect about offering Model Y details. That said, this is what we know so far.

On a technical side, “three-quarters of Model Y parts are common with the Model 3 so (investment in the vehicle) are much lower,” he revealed in January. That translates not only into improved economies of scale – which drive down cost – but also into a simpler manufacturing process since Tesla has learned, painfully, how to build the Model 3 quickly.

It took time to do so, the company going through what the CEO called “manufacturing hell” for much of the first year after the Model 3 production launch in July 2017. 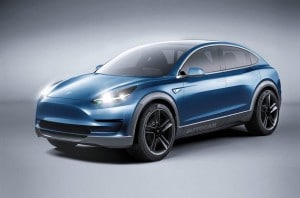 The automotive media even has taken a guess or two at what the Model Y looks like, including AutoCar. (Photo credit: AutoCar)

Physically, the Model Y will use a modified version of the Model 3 “architecture,” a skateboard-like platform that mounts batteries and motors, as well as other powertrain components, below the load floor. The approach helps maximize cabin and cargo space and also lowers the vehicle’s center of gravity – something that translates into improved handling.

Another thing we know is that the Model Y will not share the so-called “falcon wing” doors that were one of the most distinctive features on Tesla’s first sport-utility vehicle, the bigger Model X. And potential buyers should appreciate that fact.

The upward-opening portals are clearly cool looking, but they have been a technical nightmare. They forced Tesla to fire the original door supplier and then caused much of the nearly two-year delay in bringing Model X to market. Since then, they’ve been the source of ongoing quality and reliability problems, a key reason influential Consumer Reports rates Model X so poorly.

When it came to market, the Model 3 was offered with an extended range pack stuffed with 75 kilowatt-hours worth of lithium-ion batteries – enough for an EPA-rated 310 miles between charges. It has since added versions with 62 and 50 kWh packs starting at 220 miles range. The Model 3 is now offered with an optional performance package, as well, approaching the acceleration of the Ludicrous Mode found on the Models S and X. Whether Tesla will offer similar options up front is uncertain but likely over the long-term, according to analysts.

Potential customers can all but certainly expect Model Y to share key interior design elements with the Model 3, including the oversized video screen used on the sedan (as well as the older Models S and X) to operate virtually all vehicle functions. The new utility vehicle will also be equipped with a variety of radar and other sensors that will allow it to function in Autopilot mode. Musk has promised to introduce a fully-autonomous version of Autopilot this year – though what that means is uncertain. Model Y will undoubtedly have the latest version of the technology.

One unanswered question may not be fully locked down inside Tesla. In recent months, CEO Musk has said the company was still debating where the new crossover-utility vehicle will be produced, though it was leaning towards adding capacity at the Gigafactory battery-plant in Reno, Nevada, rather than taking the limited remaining space in Fremont, California, where the Models S, 3 and X are produced.

Oh, and if you see a pattern there, you’re not amiss. Musk wanted to name Tesla’s small sedan the Model E to make the joke really work, he said last year, but that name was registered to Ford Motor Co., which wouldn’t give it up. So, cut him a little bit of slack and let him relish the idea that with the launch of the new crossover, the automaker now has a truly “S3XY” product line-up – with more to come.