Daimler Getting Smart With Forease+ at Geneva Show

The new model is a more practical, down-to-earth version of the forease. 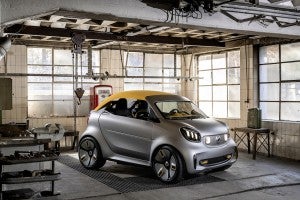 Smart is introducing the next iteration of its forease concept: the forease+. The hardtop can be seen at the Geneva Motor Show this year.

Daimler continues to tinker with its smart car brand, now an all-electric portfolio, and at the Geneva Motor Show it will show off its forease+, which is the next edition of its small electric, this time with a hardtop roof.

The smart forease+ is more than a showcar, Daimler claims, adding “it is the embodiment of the smart brand itself: individual, dynamic, sustainable.” The smart forease+ traces its origins all the way back to the forease, a small open air city car that debuted last fall at the Paris Motor Show.

Like its predecessor sibling, it features quirky headlights, an almost comically designed exterior and interior all brought to life within an iconically small footprint. However, as a city car, an idea which is quickly gaining steam, a standout model could succeed.

“As a stylish and well-thought-out idea, the smart forease+ shows the spirit of the brand: individual, scaled back and sustainable. The showcar is also an impressive statement of coolness and urbanity typical of smart,” said Katrin Adt, head of smart.

Obviously, the big difference between forease and forease+ is the roof, which isn’t something that was just thrown on top of the car by engineers who then yelled “Presto!” A fair bit of thought went into it.

A light yet firm fabric hard shell covered in a textile soft top fabric combines many benefits. It is light, robust and yet suitable all year round. The roof is designed to be removable and engages in two cut-outs on the rear which provide an apt reference to the model designation with the “+ push” lettering.

“The smart forease+ projects its technical and creative intelligence in one clear emotion: #rooflove,” said Gorden Wagener, Chief Design Officer Daimler AG. “The unconventional concept, the self-confidence and the dynamics: the smart forease+ is a statement for urbanity.”

If the forease was folly – and it may have been, the forease+ is practicality, in other words, what could actually be found on the streets in the near future. That is not a guarantee, but a look at the new model and examination of the updates suggest that not only is the city car idea a serious one, Daimler believes it cannot be ignored.

(To see more about American’s believing the future is electric, Click Here.)

Whether that means something hitting the streets or back to the drawing board remains to be seen, but it’s certain we won’t know until after Geneva this week.