BMW: The Leading US Exporter of New Vehicles

Automaker's SUVs extreme popularity give it the title. 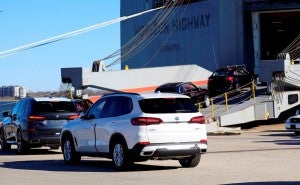 Once again, BMW is the top exporter of vehicles from the United States. For the fifth year in a row, the German automaker’s X series sport activity vehicles took it to the top of the heap.

The company said it exported 234,689 units of its sport-utilities and coupes from its Spartanburg, South Carolina, plant during 2018, totaling more than $8.4 billion in 2018.

“This achievement clearly reinforces BMW’s ongoing commitment in the U.S. With additional models such as the first-ever BMW X7, the BMW X3 M and X4 M, and the recently-announced BMW X3 and X5 plug-in hybrid vehicles, we anticipate an increase in production and exports for 2019.”

(BMW pumps up with new X3M and X4M utes. Click Here for the story.)

In 2017, BMW announced an additional $600 million investment in the Spartanburg plant from 2018 through 2021 for manufacturing infrastructure for future generations of X models. Last month, the plant produced the 4.5 millionth BMW built in South Carolina.  Later in the year, associates will mark 25 years of BMW production in the state.

Holding the title this time may be more important than in year’s past as President Donald Trump has threatening to place a 25% tariff on imported vehicles. Trump has been pushing German automakers build more vehicles in the U.S. This can only bolster BMW’s claim to be exempt from tariffs in the future.