“The heart and soul of the GTI.” 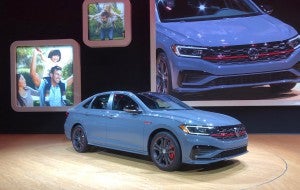 The 2019 VW GLI blends the sportiest features of the Jetta and GTI models.

There are some things that Europeans and Americans just never can agree on, starting with hatchbacks and sedans. True, utility vehicles have come to dominate the U.S. marketplace, but sedans still make up a strong share of sales. Hatchbacks just can’t seem to climb out of the niche category.

So, for those who’d like the power and road-holding dynamics of a Volkswagen GTI, the GLI offers a viable, four-door alternative. And the German maker “ups the performance ante,” it promises, with the launch of the sixth-generation sedan that made its debut at the Chicago Auto Show.

“Volkswagen has long been synonymous with small, sporty cars,” said Scott Keogh, CEO, Volkswagen Group of America. “The redesigned 2019 Jetta proved once more that its combination of design, technology and value continues to resonate with buyers. The 2019 GLI takes the Jetta foundation and adds performance features from the Golf GTI to give buyers a true sport sedan.”

The 2019 Volkswagen GLI borrows key design elements from the latest-generation Jetta. That includes its coupe-like roofline and the oversized black honeycomb grille. But its suspension has been dropped 0.6 inches, giving it a more well-planted look. The sport model also gets LED projector headlamps and LED running lights lifted from the GTI hatchback. 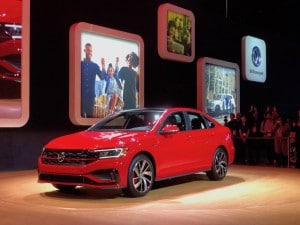 The gen-7 GLI sits lower than the Jetta to enhance its sporty appearance.

It’s a real fusion, with Golf R brakes, including bright red calipers, peaking out from behind 18-inch aluminum alloy wheels unique to the 2019 GLI.

The cabin also starts out as a Jetta but adds black and red accents, include a red-stitched steering wheel, shifter and armrests. There are sports seats in cloth or optional leather. And that anniversary addition adds special seat tags, floormats and sill plates.

But the heart of the GLI is VW’s 2.0-liter turbo-four direct-injection gas engine. It punches out 228 horsepower – albeit on premium fuel – and 258 pound-feet of torque. That’s a hefty 18 hp and 41 lb-ft more than the sixth-gen GLI. Power is routed to the front wheels through a six-speed manual gearbox, though there’s an optional seven-speed dual-clutch automatic that adds Stop/Start capability to improve fuel economy.

A motorist can choose from four different driving modes to customize throttle and shift response, steering, and even the GLI’s exhaust note. The Custom mode also allows the driver to tweak the behavior of the front differential, as well as the climate-control system. And the anniversary edition adds a fifth, Comfort mode. 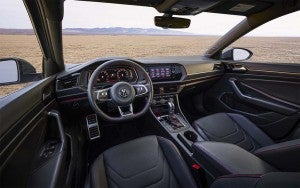 The new GLI gets more tech features, including Apple CarPlay and Android Auto.

Up front, the GLI gets a strut-type suspension, with a multi-link rear. The GLI shares the GTI’s torque-sensing limited-slip differential, as well as variable-ratio electric power-assist steering. The anniversary model adds an adaptive damping system.

On the tech side, there’s a touchscreen infotainment system with Apple CarPlay, Android Auto and MirrorLink. The car’s ambient lighting can be adjusted to shine in 10 different colors. And driver assistance systems include Forward Collision Warning with Automatic Emerging Braking, Blind Spot Monitoring, Rear Traffic Alert and Post-Collision Braking.

Pricing will be announced before the 2019 Volkswagen GLI goes on sale this coming spring.

(Click Here to see more about VW’s plan to invest $800 million to build EVs at its plant in Chattanooga.)