Automaker not revealing much with latest clue. 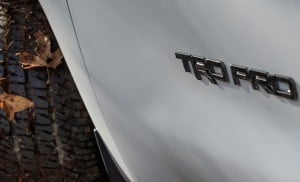 Toyota offered up a bit a teaser for its new TRD Pro offering. It didn't say what vehicle will be getting the package or if it was a separate vehicle entirely.

Toyota was already preparing to show off its updated 2020 Tacoma at this year’s Chicago Auto Show. However, the automaker also has a surprise up its sleeve for Windy City attendees this year.

The company released a teaser video and image today touting a new “TRD Pro off-road beast” that will make its debut in Chicago. This new vehicle will lead “the charge for a host of updates across the TRD Pro line-up,” the company said in a statement.

Nothing further is offered leaving so many options open. Will the Tacoma be getting a new TRD treatment? Is Toyota creating a separate TRD Pro vehicle not currently in the line-up? The picture is of no real help.

The video about it doesn’t offer up much more either. However, the company does offer TRD versions of the Tacoma, 4Runner and Tundra. Apparently, they’re up for a revamp based on the scant amount of detail Toyota provided.

(Toyota teases Tacoma ahead of Chicago Auto Show. Click Here for the story.)

However, it could be expanded to a few other vehicles such as its full-size SUV, the Sequoia, as well as perennial favorite, the Land Cruiser. The likely candidate is the Sequoia. The Land Cruiser has a strong following already whereas the Sequoia has never seemed capture the imagination of the public.

A TRD Pro package could certainly generate some much-needed buzz for the big ute. As for the rest of the vehicles getting the upgraded TRD package, other automakers offer similar variants in their line-ups as well.

The unveiling will happen on Thursday, but in the meantime the launch of the new Tacoma, which is wading into a sea of new competitors in the midsize truck market, will have to sate Toyota fans.