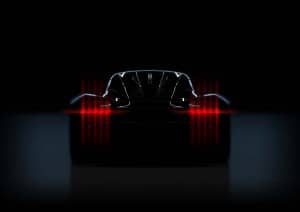 The latest Aston Martin hypercar will use an F1-influenced gas-electric drivetrain.

From a company struggling to avert yet another bankruptcy only a few years ago, Aston Martin has bounced back with a vengeance, as it plans to demonstrate with the debut of a new hypercar at the Geneva Motor Show next month.

“It was always the intention for the Aston Martin Valkyrie to be a once-in-a lifetime project,” said Aston CEO Andy Palmer. “It was also vital to us that Valkyrie would create a legacy: a direct descendent that would also set new standards within its own area of the hypercar market, creating a bloodline of highly specialised, limited production machines that can exist in parallel with Aston Martin’s series production models.”

(Click Here for the latest on Aston’s plans for its first utility vehicle, the DBX.)

The Project 003 hypercar will mark the latest step in Aston’s push into electrification. It will be powered by a Formula One-influenced gasoline-hybrid drivetrain that Palmer previously indicated would top 1,000 horsepower, launch to 60 in under 3 seconds and give it a top speed in excess of 200 mph. 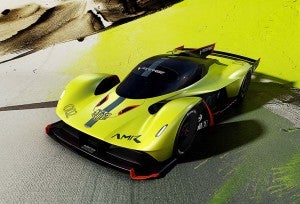 The track-only Valkyrie AMR Pro will turn out something around 1,100 horsepower.

The as yet-unnamed production version will help Aston position itself as a more aggressive sports car brand able to take on the likes of Ferrari, Lamborghini and McLaren. Another project in the works, the Aston AM9, is taking dead aim at the Ferrari 488.

Under the skin, Aston says will be a “lightweight structure” expected to make extensive use of materials such as carbon fiber and aluminum.

It also will feature active aerodynamic and active suspension technologies that should allow it to run on track while remaining street-legal.

“Project ‘003’ is also being designed and engineered to offer more practical concessions to road use, including space for luggage,” the automaker said in a statement.

Only 500 copies will be produced – in both left and right-hand-drive – and Aston plans to homologate it so that the final version will be available to buyers in all major global markets.

The automaker has not announced a price, but it is expected to push into seven figures. 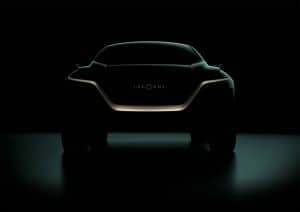 (Click Here for details about Aston Martin rolling out a limited line of “Goldfinger” DB5s.)

The annual Geneva event will be a big one for the company formally known as Aston Martin Lagonda. The latter badge has been absent for decades from the corporate line-up. But it will make a grand return at the PALExpo convention center in the form of the Lagonda All-Terrain Concept. It is believed to be a thinly disguised version of the production crossover that will be launched in less than two years. It also will anchor the plan to make Lagonda an entirely all-electric brand.

The Geneva show also will see the debut of the Aston Martin Valkyrie AMR Pro.

(For more on the Lagonda All-Terrain Concept, Click Here.)