Project will focus on heavily polluted Port of Los Angeles. 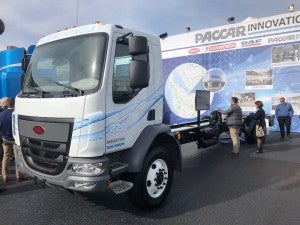 Toyota is teaming up with Paccar to develop a next-generation fuel-cell powered semi-truck to be used at the ports of Los Angeles and Long Beach.

Toyota is teaming up with Paccar, one of the world’s largest producers of heavy-duty trucks, to build 10 hydrogen-powered Class 8 prototypes.

The rigs will go into operation at the twin ports of Los Angeles and Long Beach, California, where the thousands of diesel trucks currently in use catch blame for a disproportionate share of the region’s air pollution. The project comes as environmental regulators are putting into place plans to completely eliminate conventional diesel trucks at the two ports by 2035.

“This is not just a science experiment,” said Bob Carter, executive vice president, Toyota Motor North America. “The goal is to make a difference in society, to remove pollution and improve the air quality in and around the Port of Los Angeles.”

Regional air quality regulators have left open the question of how to meet the new zero-emission truck mandate. There are several options available to truck manufacturers, including the use of battery power and hydrogen.

Toyota, which already has invested heavily in the development of fuel-cell technology for its Mirai sedan, sees an opportunity to scale up that technology for truck applications.

The carmaker previously partnered with Paccar and its Kenworth brand to field a prototype hydrogen truck that has spent the last year at the L.A. ports. They now will update the technology and use it for an expanded fleet of 10 prototypes.

“We believe that carrying energy in the form of hydrogen for heavy-duty Class 8 trucks makes more sense than carrying it in batteries,” because the trucks can be refilled faster and offer longer range, said Brian Lindgren, director of research and development for Paccar subsidiary Kenworth. 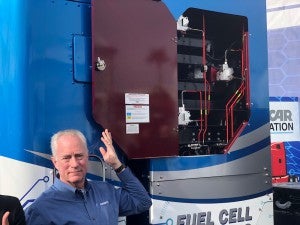 Brian Lindgren, director of research and development for Paccar subsidiary Kenworth, displays the fuel cell technology from the first-generation of semi trucks.

Fuel-cell technology was first conceived back in the 1950s. The process forces hydrogen gas through a catalyst-coated membrane where it bonds with oxygen from the air, crating both water vapor and a stream of electrons that can power the same electric motors that are found in a battery-electric vehicle. That’s why some experts refer to fuel-cells as “refillable batteries.”

Andy Lund, the chief engineer for Toyota on the project, says he sees a number of advantages over conventional batteries. In a passenger car like the Mirai, a fuel-cell tank can be refilled in about 5 minutes and deliver roughly 300 miles of range. A Class-8 truck would take longer to refill, but would still be substantially quicker than the hours needed to recharge a truck battery big enough for a semi.

Range would be 400 miles or more, added Kenworth’s Lindgren, while a production version of the truck they’re building should be able to offer the same load-hauling capacity as today’s diesel rigs.

Fuel-cell technology is nearly as quiet as the drivetrain in battery-electric vehicles, Lindgren added – so quiet, in fact, that reporters attending a CES news conference were surprised to learn the truck behind the Paccar engineer had been idling the whole time.

The fuel-cell system that will be used in the prototypes will be supplied by Toyota and is an updated version of an original test vehicle that operated at the ports this past year. The new trucks will actually pair two stacks producing about 228 kilowatts, or 306 horsepower. That understates the power the technology delivers because the electric motors that drive the wheels produce tremendous amounts of torque – though Paccar and Toyota officials didn’t have the final torque numbers available.

“Drivers like these trucks because they are peppy and quiet,” Lindgren said.

In terms of energy efficiency, the hydrogen-powered rig would roughly match up with today’s diesel semis, at about 5 to 6 mpg.

Not everyone is convinced hydrogen power will prove viable, however. Tesla CEO Elon Musk is fond of calling the technology “fool cells,” and he isn’t the only critic. Skeptics note that there is no ready source of hydrogen, nor an installed distribution network as there is for either electricity or diesel fuel. 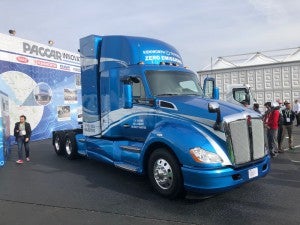 The first generation of Kenworth's fuel cell trucks is the basis for Paccar's new group of trucks.

They also point out that hydrogen must be produced either by cracking water into its component elements – two parts hydrogen, one part water – or by refining fossil fuels ranging from coal to petroleum to natural gas. Those approaches can be energy intensive or result in carbon dioxide emissions.

Tesla is one of several companies that are focusing on battery-powered Class 8 trucks, Musk previewing a running version of the Tesla Semi in November 2017.

But Toyota isn’t the only proponent of a fuel-cell solution. Nikola Motor Co. is developing its own hydrogen-powered semis. It plans to launch production of one Class 8 model, the Nikola One, later this year. The Salt Lake City-based start-up claims to have received about 8,000 advance orders worth more than $6 billion.