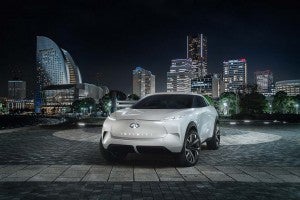 Infiniti will reveal the all-electric QX Inspiration concept at the 2019 NAIAS on January 14th.

It’s been a year since Infiniti, Nissan’s luxury brand, announced plans to shift to an “all electrified” powertrain strategy starting in 2021, but the automaker plans to give us a hint of what’s coming with the debut of the QX Inspiration concept vehicle at the North American International Auto Show later this month.

The show car picks up some of the design cues we first saw at the 2018 NAIAS in the form of the well-reviewed Infiniti Q Inspiration. But it picks up on the dramatic market shift from sedans and coupes to SUVs and CUVs.

“QX Inspiration is the beginning of a new era for INFINITI and an illustration of where we want to go with the brand,” explains design director Karim Habib. “New technology has given us the opportunity to evolve our design philosophy – and the new vehicle communicates the serene strength at our core.”

The QX concept clearly reveals itself to be all-electric. For one thing, with no internal combustion engine, there’s no traditional grille, just downsized scoops to provide air to cool the drivetrain components. High-tech headlamps, meanwhile, give the show car a cat’s eye look.

As the accompanying image suggests, the QX Inspiration adopts a more ute-like shape than last year’s Q Inspiration, but it also illustrates some of the changes made possible with an electrified platform. With motors, batteries and other key drivetrain components hidden under the floor, more space can be devoted to passengers, yielding what is expected to be a cavernous interior. Infiniti showed off its Inspiration Concept in Detroit last year.

“The development of new electric vehicle platforms enables the formation of spacious, lounge-like interiors,” Infiniti says in a release accompanying the teaser image. “In the case of the QX Inspiration concept, the cabin has been hand-crafted using traditional techniques and a choice of materials inspired by a subtle Japanese sensuality. New interior technology follows the Japanese hospitality principle of omotenashi, creating a welcoming environment while assisting drivers and connecting occupants to the world around them.”

(Click Here to check out what Hyundai bills as the “ultimate mobility vehicle.”)

While Infiniti is saving key details for the official reveal of the QX Inspiration concept on January 14th, it has offered a few tantalizing hints of what else we might discover. As with last year’s Q Inspiration, the new concept vehicle will certainly put a premium on performance. It would be a surprise if its electrified drivetrain doesn’t make at least 400 horsepower and, perhaps, substantially more. Power, meanwhile, will likely be directed to all four wheels.

Meanwhile, the prototype may introduce new autonomous or, at the least, semi-autonomous driving capabilities. Infiniti and its down-market sibling have already begun rolling out more limited, hands-free capabilities and Nissan, in particular, has promised to become one of the first to bring full self-driving capabilities to market.

Going forward, Infiniti plans to phase in the availability of electrified drivetrain technology on almost all of its products starting in 2021 – the exception being some of its biggest SUVs, it announced last year.

“Infiniti will have a specific focus on electrification,” Nissan CEO Hiroto Saikawa said during an appearance at the 2018 NAIAS, adding that, “We are trying to position Infiniti as the premier electrified brand” as part of the five-year Nissan business plan that will extend through 2022.

(Oil-rich Norway has become the land of the electric vehicle. Click Hereto find out why.)

But don’t expect to see the brand walk away from the internal combustion engine entirely, even on smaller product lines. The automaker has only just begun rolling out new gas-powered technology in the form of the VC-T, or Variable-Compression-Turbo, engine which marks the first time a mass-produced powertrain can alter its compression ratio. That approach lets it constantly optimize for performance and fuel economy.

Infiniti is expected to offer buyers a mix of plug-in and pure electric models as it pushes into the coming decade.