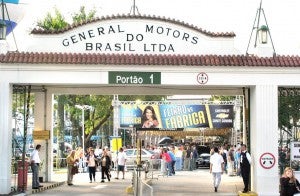 GM warned that after three years of heavy losses, its Brazilian operations will need to make some cuts.

General Motors is warning that it will need to restructure its operations in Brazil after three years of heavy financial losses.

In a message posted at Brazilian plants, GM’s top executive in Brazil and Argentina, Carlos Zarlenga, said after running up a heavy loss during the past three years the operation had reached “a critical moment that will require sacrifices from everyone,” according to Reuters.

GM Chairman Mary Barra said last week GM, like other automakers, is facing challenges in South America. “We are not going to keep deploying capital to lose money,” she said.

In the wake of the steep decline in vehicle sales across South America, analysts have speculated that global automakers from Europe and North America, such as Ford, might be reconsidering their operations in the region, particularly since it also has been targeted by Chinese manufacturers.

(Ford, VW could roll out a series of deals over coming weeks and months. Click Here for the story.)

GM CEO Mary Barra says that the company will not continue to throw money at its South American operations if it's not profitable.

Jim Farley, Ford Motor Co. president for global markets, said earlier this month that Ford was preparing a turnaround plan for its South American operations and last week, Ford and Volkswagen AG announced a partnership that will focus on developing new vans and midsize pickup trucks – products that are popular in South America.

The dire tone of the GM warning came as a shock to workers in Brazil, where GM has overtaken Volkswagen and Fiat Chrysler Automobiles NV in sales as the Brazilian economy rebounds from a deep slump. Union leader Renato Almeida called GM’s statement “absurd,” according to Reuters.

“The company is going through a good moment in Brazil,” said Almeida, vice president of the metalworkers union in Sao Jose dos Campos. “There is no justification for them to suggest they would shut down operations.”

Brazilian auto workers have a reputation for militancy and have battled GM over cuts in the past. Roughly 4,000 GM employees walked out of a plant near Sao Paulo in August 2015 and actively blocked the elimination of 800 jobs even as the Brazilian economy slowed. 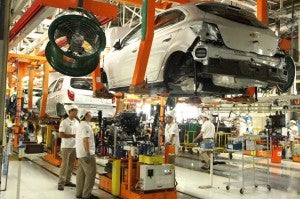 GM's sales have surpassed Volkswagen and Chery's in Brazil, but at a huge cost.

While Brazil’s economy has gradually recovered after a 2015-16 recession, Argentina fell back into recession last year as inflation surged and its currency slumped. The investment community is watching to see if the leaders of both countries can make good on the tough economic reforms they have committed to.

Zarlenga said regional executives had prepared a “viability plan” for senior management in Detroit, but they still need the support of local unions, suppliers, dealerships and government. “GM investments and our future depend on this plan,” he said.

(To see more about VW’s efforts to restart sales in Brazil, Click Here.)