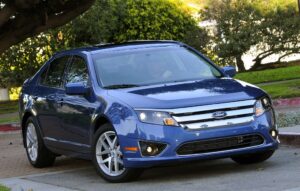 The 2010 Ford Fusion is part of the automaker's most recent recall to fix faulty Takata airbags.

The largest automotive recall in history continues as Ford recalls more than 953,000 vehicles worldwide to replace Takata passenger airbag inflators that may overinflate, explode and hurl shrapnel into the car’s cabin.

Ford says it doesn’t know of any injuries in vehicles included in this recall. Dealers will replace the inflators, and some of the recalls may be limited to specific geographic regions of the U.S.

The recall represents a planned expansion of previously recalled vehicles to additional model years within the geographic zones defined earlier by NHTSA. The Ford reference number for this recall is 19S01.

NHTSA took over the administration of the recalls when it became too large for Takata and the nearly two dozen automakers involved to manage. The supplier, which went bankrupt, had trouble making enough replacement inflator kits to keep up with the need.

At least 23 people have been killed, and nearly 200 more injuried worldwide by the inflators.

Takata uses the chemical ammonium nitrate to create an explosion to inflate air bags. But it can deteriorate over time due to heat and humidity and explode with too much force, blowing apart a metal canister designed to contain the explosion.

The recalls are being phased in through 2020.