Deal or No Deal Makes for a Great Deal for Ford 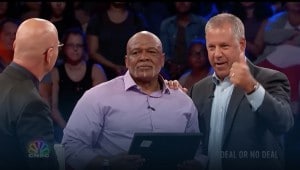 Ford retiree John West, center, was joined by Ford's Joe Hinrichs, right, during Deal or No Deal last night, where West walked away with $200,000.

As other automakers like Fiat Chrysler, Hyundai and others seek top time slots for television ads during this weekend’s Super Bowl, Ford may have beaten them all to the punch after last night’s Deal or No Deal.

The appearance was very Ford themed. While talking about Detroit and specifically his time at Ford Motor Co., there were two other ties to the Dearborn, Michigan-based automaker.

First, was a video appearance by Detroit Lions QB Matthew Stafford, who invited West and his sons to a Lions game when they “get back in town.” He also gave them all autographed gym bags. The Lions are owned by the Ford family, primarily Martha Firestone Ford.

(Ford prepped to increase production at Ranger plant. Click Here for the story.) 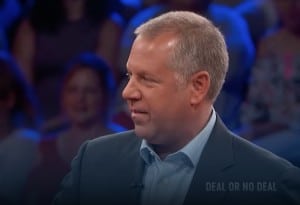 Hinrichs talks with West and Howie Mandel during Deal or No Deal.

Hinrichs looked to make up for an uneventful retirement from Ford with a plaque honoring West for his 34 years of service to the company. He also invited West and his sons – two of which currently work for the company – up to “the penthouse office” at Ford World Headquarters for lunch with Bill Ford Jr., the company’s chairman, to celebrate West’s retirement in style.

“We had a lot of fun taping the show and surprising John — as I make my debut on a TV game show,” he wrote on LinkedIn, according to Automotive News. “Always special to be a part of the extended Ford family for life!”

West, who said he “built Mustangs” when he joined Ford in 1973, could have won as much as $1 million. However, he walked away from the show after negotiating a deal with “the banker” for $200,000. However, his start on the episode didn’t portend his strong finish.

He wiped out many of the high dollar amounts that are key to soliciting a strong offer from the banker. After small offers of $11,000 and $8,000, he was offered his dream car: a Ford Mustang. After consulting with the five sons, who also appeared on the show, he turned it down, despite the fact he wanted his “hair to blow in the wind.”

His plan was to split the money up among his sons, after keeping enough to buy a new Mustang convertible. He went on an extended run of selecting smaller dollar value offerings, driving up the offer from the banker from $0 after the Mustang offer, to has high as $176,000, when he elected to counter offer at $200k, which was accepted.

If he had pursued the game all the way to the end, he would have gotten an offer as high as $524,000 before finding the initial case he selected was worth just $10 at the end.