Degenhart believes self-drivers are farther away than automakers say. 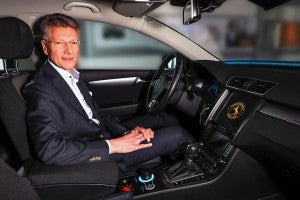 Continental AG Chairman Elmar Degenhart said he believes that self-driving cars are much further way than automakers suggest will happen.

While automakers may have you believe that self-driving vehicles are right around the corner, at least one auto supplier believes that it will be well into the next decade before autonomous vehicles will be capable of venturing beyond a well-defined area and take to the open road.

Instead, drivers will continue to adapt to advanced driver assistance systems, also known as ADAS, which will help make the transition to self-driving cars easier for uneasy vehicle owners.

Consumer Reports has become an advocate of blind-spot detection, which alerts drivers if another vehicle is too close to change lanes safely. Falling prices also have helped speed up consumer acceptance of the technology.

In addition, there are indications that buyers or at least buyers of expensive vehicles appear willing to pay for emergency braking features.

Regulation also has spurred the use of new safety-oriented technology from anti-lock brakes to electronic stability control to the use of advanced driver assistance systems, which include features such as blind-spot detection and lane keeping assist alerts that signal the approach of vehicles when a motorist is leaving a parking space, officials from the German-based supplier said.

However, more sophisticated Level 2 or Level 2-plus systems that could that are still a couple of years off and won’t be available until the 2021 to 2023 time period. The Level 3 or near automated driving, which might allow drivers to glance through e-mails while behind the wheel but alert a motorist they need to take back control of the vehicle won’t be ready until 2025 or 2026, Degenhart said.

(Click Here to see how automakers could be left out of the development of autonomous vehicles.)

Level 4, or fully automated driving system capable for maneuvering in traffic and on the open road, is very complex problem. “It really will take years to develop,” he said.

The basic ADAS system now found on vehicles require perhaps seven specific sensors to monitor incoming information. A Level 4 system for fully automated driving will probably require more than 30 sensors plus the computing power needed to analyze the information from the various sensor simultaneously and reach a correction decision, he said.

At the same time, the automotive industry is operating under some difficult financial constraints. Degenhart said Continental expects the industry “to go sideways” in 2019 rather than grow.

Continental is growing slightly fast than the industry and now anticipates revenue of 45 to 47 billion euros, compared to 44 billion in 2018. At the same time, Continental also making substantial investments in research and development and technology.

(To see more about how experts believe autonomous cars will have the same impact as smart phones.)

Fortunately, Continental has been able to grow size of its tire business organically and has not had to expand through acquisitions. Tires now account for 11 billion euros in revenue and has added stability for the entire company, Degenhart said.