Lentz has reservations about NAFTA replacement as well. 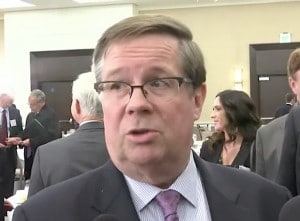 Toyota's Jim Lentz expressed concern about the imposition of new tariffs and the impact they'll have on the auto industry.

The imposition of a new round of tariffs by the Trump administration could raises the price of new cars and trucks and cripple the U.S. auto industry, Toyota’s top executive in the United States said this week.

Jim Lentz, chief executive officer of Toyota North America, said during an appearance at the Detroit Economic Club, like at Ford and General Motors, Toyota operating costs for steel and aluminum have increased by because of the increase in tariffs on steel and aluminum.

“We use American-made steel, but the cost has gone up 40%,” Lentz said.

The auto industry also is now challenged by the “232 Investigation,” which the Trump administration launched to determine if imported automobiles and automobile parts pose a threat to U.S. national security and its threats to pull out of NAFTA or the revised trade agreement with the Mexico and Canada.

“The 232 tariffs would hurt everyone,” Lentz added. Approximately 25% of the components of every car assembled in U.S., Canada and Mexico come from beyond the NAFTA region. Thus, tariffs would have a big impact on the U.S. economy, driving up the price for consumers and reducing sales of new vehicles by 2 million units annually.

In the case of Toyota, higher tariffs on imported parts could boost the price of a Camry assembled in Kentucky by $1,800 while the cost of Toyota pickup truck assembled in Texas would increase by $2,800, Lentz said. 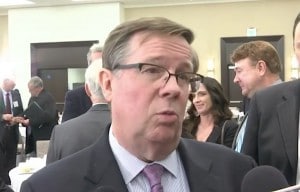 Lentz said the elimination of NAFTA would a nightmare for automakers.

Pulling out of NAFTA it would also seriously damage the U.S. auto industry, Lentz said.

“It would be a disaster for the industry,” Lentz said. “For North America to be competitive with other manufacturing regions of the world – Asia, Europe – we need to be able to our costs down. NAFTA has allowed us to do that, so if we to lose NAFTA, it would make it difficult for us to compete with cars made in Asia and cars made in Europe,” Lentz said.

Lentz added the automakers aren’t able to make adjustments quickly because they work with long product cycles, five or six years long and much of the intellectual property in individual components belongs to the suppliers.

“Congress has to sign it. If they deadlock there will have to be some negotiation with the President,” Lentz added.

However, Congressional Democrats have indicated they have serious reservations about the trade pact the Trump administration has negotiated with Mexico and Canada to replace NAFTA. Democrats want tougher environmental and labor rights provisions in any new trade agreement.

Lentz, however, also stressed Toyota was upbeat about the prospects for the coming year. The automaker is scheduled to introduce the new Supra in Detroit in January and will begin building the new Corolla in Mississippi this spring, he said.

“We’re still very bullish on the market,” said Lentz, noting that Toyota had underestimated sales for this year as prepared when it made its forecast for 2018 a year ago. and now expects 2019 to be around 17.1 million units.