The car key may soon become a thing of the past. 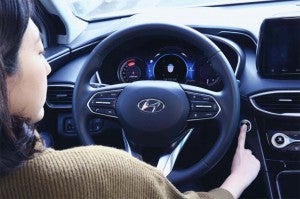 A driver starts up the new Hyundai Santa Fe simply by using her fingerprint.

If you own a relatively recent smartphone odds are you no longer have to bother remembering a passcode, instead relying on fingerprint or facial recognition. Now, it seems, automakers are starting to move in the same direction.

Hyundai has pulled the wraps off the new Chinese version of the 2019 Santa Fe and, buyers in that market will be offered the ability to equip the SUV with a fingerprint recognition system that can lock or unlock the vehicle while also starting the vehicle. Depending on which of multiple users the vehicle recognizes, it will even set up automatically such things as seat position and sideview mirrors.

But Hyundai isn’t alone. A number of other automakers are looking at other ways to replace the traditional vehicle key or wireless keyfob with things like wearable bracelets and smartphone apps that an owner can share with friends and family.

(Hyundai goes big with new Palisade 3-row Click Here to check it out.)

Hyundai actually isn’t the first to introduce fingerprint readers into a vehicle. Bentley recently revealed plans to offer the technology on a customized version of its Bentayga model, though it will have more limited application, controlling access to a storage bin in the center console. 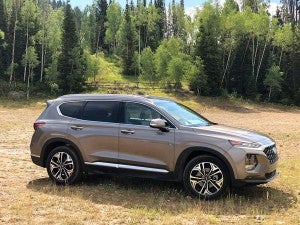 The fingerprint reader won't be available on the U.S. version of the 2019 Hyundai Santa Fe.

“This discreet and unobtrusive locker creates the ideal place to stow valuables while at the beach, on the ski slope or utilizing valet parking services,” the automaker explained.

Hyundai’s system goes significantly further by effectively replacing a conventional vehicle key, according to a report in the Korea Herald. It will allow a user to enter or exit and start the car. That’s a significant development because it requires a fingerprint reader far more robust than one on a smartphone. It has to operate in all sorts of weather conditions, potentially even when there is ice or snow, as well as dirt, on the outside of the vehicle.

The automaker said the system which, like a smartphone, replies on capacitance, rather than an optical sensor, to distinguish one person’s print from another’s, has an error rate of around 1 in 50,000 – about what Apple claims for the devices using its touch system. It isn’t clear if the Hyundai system comes from the same provider or uses the same software.

The new system, which initially will be used only in China, is designed to resist hackers, a real problem for the industry as it moves to increasingly high-tech vehicle systems. Several recent news reports have alleged that thieves have been able to make off with Tesla vehicles by cloning signals from their keyfobs – something captured on video during one robbery in the UK.

The Hyundai system will allow an owner to personalize his fingerprint access so that the car can adjust seats, position mirrors and even regulate other vehicle functions with a planned update. 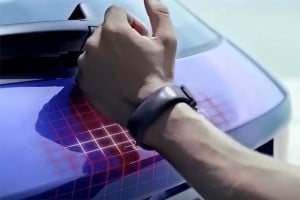 Jaguar owners can use the wristband "Activity Key" on models like the F-Pace SUV.

Biometric systems are finding increasing application in a number of areas, notably in special boarding lines operated by Clear at many major U.S. airports. Rent-a-car giant Hertz recently teamed up with Clear to allow preferred users to quickly get into their rental cars without the usual counter hassles.

Automakers are exploring a variety of ways to replace conventional keys. Jaguar, for one, now offers what it has dubbed the Activity Key on some models, such as the F-Pace and I-Pace SUVs. It’s basically a waterproof wrist band with a near-field communications, or NFC chip, much like those used by many hotels instead of regular keys. The automaker bill it as particularly useful for swimmers and other folks who don’t want to carry a regular key or fob. They place the bracelet close to a reader on the back of the vehicle to unlock it, though they still have to have the regular key or fob inside to operate the vehicle.

(For more on the all-new BMW 3-Series, Click Here for the review.)

BMW, meanwhile, is offering buyers of the new, 2019 3-Series the ability to turn their smartphones into digital keys if their device is equipped with an NFC system. In this case, it entirely replaces the key. And it can be shared with as many as five different drivers.

Traditional keys and fobs aren’t likely to vanish anytime soon, but automakers are looking for ways to supplement them with new, easier to use options that will be showing up on more and more vehicles over the next few years.