Ford Motor Co. top executives said they think they can wrap up discussions on a broad alliance with Germany’s Volkswagen AG fairly soon since both sides have demonstrated a serious interest in the discussions.

Ford CEO Jim Hackett told reporters during a gathering at Ford plant outside Detroit that the company’s discussions with Volkswagen were moving forward at a steady clip and could conclude soon.

News You Can Trust!

“We have nothing to announce yet,” Hackett said. “But I just want to confirm we’re serious. I think the industry feels at the margins are under pressure. So these accommodations are more normal than not. There is real momentum there,” he said of the talks with VW.

Ford Executive Chairman William Clay Ford also told reporters the discussions are wide ranging and including a variety of issues including sharing technology and future products.

(Volkswagen may use Ford plants for vehicle production. Click Here for the story.) 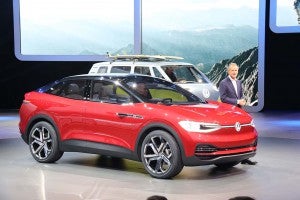 VW's Herbert Diess is looking for additional manufacturing capacity and Ford may provide it.

“The talks are going really well, and the cultures of the teams seem to mesh. So there is nothing but positive things to say. But it’s our preference is to play this close to the vest. I don’t want to have to walk back a statement,” William Clay Ford said.

The Ford chairman also emphasized that he was would not take issue with any of the comments VW CEO Herbert Diess made outside the White House about building VW’s in Ford’s U.S. plants. “There is nothing that’s been said I object too at all. He was sort of on the spot,” he said.

Hackett, though, noted that room for building VWs at Ford factories is rather limited now.

“Ford now builds more vehicles for sale in the U.S. in its U.S. plants than other manufacturer. I am really proud of our utilization rate. We manage that really well,” said Hackett, who noted even though the company is dropping many of its sedans, the company’s plants are being converted to building other “silhouettes” used for trucks and utility vehicles.

“A year ago, when we said we don’t intend to lose any sedan customers, we’ve been able to move people inside the production of other silhouettes. It’s a great story,” said Hackett, who dismissed reports from analysts, suggesting was preparing to lay off up to 15,000 employees.

Volkswagen's Chattanooga plant is, for now, the company's only plant in the U.S.

General Motors announced planned to close five factories in the U.S. and eliminate 15,000 jobs and there has been widespread speculation among analysts that Ford was also planning sweeping cuts.

Hackett also minimized the impact of the of President Donald Trump’s threat to eliminate subsidies for electric vehicles, noting the cost of batteries is dropping dramatically making them more saleable. “We think the issue with EVs has been consumer adoption. We think the EV of the future isn’t a science project. It’s designed into the vehicles you love: the Mustang and the Ford F-150.

(To see more about Ford’s discussions with Volkswagen, Click Here.)

Diess also said VW was also “considering building a second car plant” in the United States, adding, “We are in quite advanced negotiations and dialog with Ford to really build up a global automotive alliance, which also would strengthen the American automotive industry.”