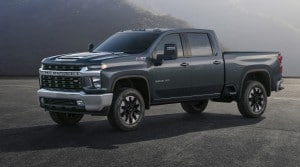 The 2020 Chevy Silverado HD borrow plenty of exterior styling cues from the Silverado 1500, but enhances them for a tougher look.

Chevrolet continues to expand pickup buyer options with the debut of the all-new, 2020 Silverado HD, the third version of the bowtie brand’s truck to launch during the last 18 months.

The big trucks shares many of the now-familiar design cues first seen on the light-duty Silverado 1500, but adopts a more rugged look, with a massive front grille that presents an imposing presence, especially when viewed in one’s rearview mirror.

“We know the needs and priorities of heavy-duty customers are different than those of either light-duty or medium-duty customers,” said Jaclyn McQuaid, the Silverado HD’s chief engineer.

“As such, we built a heavy-duty truck tailor-made for them that has more differentiation than ever before from light-duty models, offers advanced towing technologies to improve towing confidence and includes new features such as the integrated bedstep, which makes it easier to access the bed while pulling a fifth-wheel trailer.”

The new Silverado HD gets upgrades inside and out for the 2020 model year.

During a recent media sneak preview, Chevrolet officials noted that the roof is the only sheet metal shared between the Silverado HD and the light- and medium-duty models.

“We set out to make a statement with the 2020 Silverado HD and wanted to visually capture the power and capability of the truck,” said Brian Izard, lead exterior designer for Silverado HD. “The result is a truck that looks like a piece of heavy machinery with modern, chiseled finishes and customer-focused details.”

Like the Silverado 1500, however, the new HD model gets some major changes to its interior, with crew cab models adding three more inches of legroom with a taller seating position, Chevy notes. Drivers will share many of the same high-tech features as the earlier versions of the Silverado, including built-in WiFi. 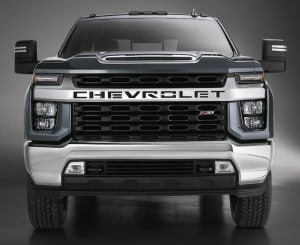 Chevy offers a 400-horsepower gas engine or a 445-hp diesel under the hood of the new Silverado HD.

Buyers will have two choices as to what they put under the massive hood of the 2020 Chevrolet Silverado HD:

Despite being slightly larger than the outgoing Silverado HD, the new model is believed to be significantly lighter. Chevy shed around 400 pounds with the latest-generation Silverado 1500.

Look for more details at the official unveiling of the 2020 Chevrolet Silverado HD two months from now. And you can expect to see it roll into showrooms around the third quarter of 2019.