Trump in Argentina for G20 Summit. 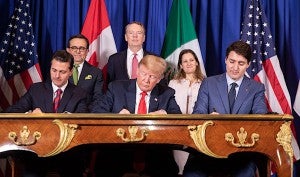 The leaders of Mexico, the United States and Canada sign the "new" NAFTA in Argentina.

The United Auto Workers renewed its attack on General Motors as leaders from the U.S., Mexico and Canada used the G20 Summit in Argentina for the back drop for officially signing a new North American Free Trade Agreement that was negotiated last summer but still must be approved by the U.S.

President Donald Trump joined the leaders of Canada and Mexico at a global meeting in Argentina for the signing of the deal, fulfilling a longstanding political promise with a deal he celebrated as a “groundbreaking achievement.”

UAW President Gary Jones, however, said GM’s announcement of the closure of five of its factories in the U.S. demonstrates that the new trade pact does not go far enough in protecting the interest of workers in the U.S.

“Before the ink hit the paper, General Motors has already signaled that the ‘New’ NAFTA (known as USMCA) is not strong enough, as it stands today, to deter them from moving products and taking advantage of low-cost labor,” Jones said in a statement released after the formal signing.

(GM selling off hotel property to raise cash, get lean. Click Here for the story.)

“Quite simply, the ‘New’ NAFTA needs more input and more work. We were hopeful that this new agreement would rein in the corporate greed that has bled manufacturing in the United States. Unfortunately, as GM’s idling of plants in Ohio, Michigan and Maryland this week showed – the ‘New’ NAFTA, as it stands now, is not strong enough to protect American workers,” Jones added. 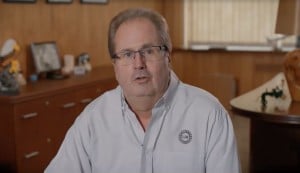 Trump also criticized GM for the plant closings even as he touted the new trade deal with Mexico and Canada. GM defended its decision to idle plants in the U.S., saying it was dictated by slow sales of passenger cars as consumer taste changed.

It also cited the need to get better control of rising costs, which have been driven, in part, by new tariffs on steel and aluminum. It also noted that by making these choices now, the company remains in a position to hire more workers later.

“GM is committed to maintaining a strong manufacturing presence in the U.S., as evidenced by our more than $22 billion investments in U.S. operations since 2009. Yesterday’s announcements support our ability to invest for future growth and position the company for long-term success and maintain and grow American jobs,” according to a statement from GM.

“Many of the U.S. workers impacted by these actions will have the opportunity to shift to other GM plants where we will need more employees to support growth in trucks, crossovers and SUVs. GM’s transformation also includes adding technical and engineering jobs to support the future of mobility, such as new jobs in electrification and autonomous vehicles. 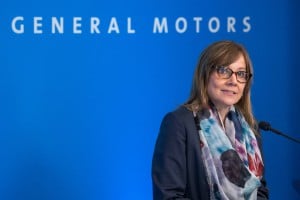 “We appreciate the actions this administration has taken on behalf of industry to improve the overall competitiveness of U.S. manufacturing.”

The U.S.-Mexico-Canada Agreement is meant to replace the 24-year-old North American Free Trade Agreement, which Trump has long denigrated as a “disaster.” However, ongoing differences about steel and aluminum tariffs the U.S. has imposed on its northern and southern neighbors encroached on the celebratory moment.

In addition, the new trade deal with Mexico and Canada must still pass Congressional Review and may not have the 218 votes necessary for approval by the U.S. House of Representatives. Congressional Democrats are demanding major revisions to Mexican labor that would give more power to independent unions.