Toyota Plugs In For Performance

Most powerful RAV4 is a hybrid; could a performance Prius follow? 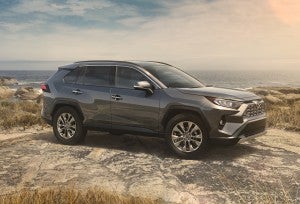 The RAV4 is now Toyota's best-seller and for 2019 the hybrid becomes its most powerful model.

No car company has done a better job marketing hybrids to the American public than Toyota. Though sales have slipped a bit over the last several years in the face of cheap gas, Toyota’s Prius remains the country’s best-selling hybrid-electric-vehicle, one of many HEVs the carmaker now offers.

That’s a significant shift in direction for Toyota which long seemed to believe that one couldn’t combine performance and fuel economy. But it now appears to be responding to a broader industry shift that sees electrified powertrain technology being used to enhance a vehicle’s fun-to-drive factor.

“We’re really trying to shift perception about what a hybrid is,” said Lisa Materazzo, the vice president of marketing for Toyota Motor Sales USA. “It’s not the smallest or the slowest (anymore). It can be the fastest.”

(RAV4 remake could be Toyota’s biggest intro in years. Click Here for the story.) 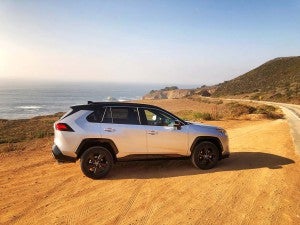 The new RAV4 hybrid will not only get the best mileage of the line-up, but also put out 219 horsepower.

Both the standard and hybrid versions of the 2019 Toyota RAV4 will feature a new, 2.5-liter direct-injection inline-four gas engine. But the RAV4 Hybrid will also integrate three electric motors into the all-wheel-drive powertrain to boost output to 219 horsepower. The gas-only SUV will make just 203 hp.

Toyota hasn’t yet released mileage numbers for the 2019 line but the new HEV model is expected to not only be the fastest version of the RAV4 but to get significantly better fuel economy than the outgoing ute which was EPA at 33 mpg on the highway.

The boost in performance was well-received by consumers during early clinics meant to test their response to the complete RAV4 makeover. While it’s not the only feature that scored well, Toyota officials said they’re confident enough to predict the hybrid will now generate about 25% of total RAV4 sales, up from 11% with the outgoing model.

That’s encouraging Toyota to rethink its overall approach to hybrids.

(Click Here to see more about the new 2020 Toyota Corolla.)

“Our goal, going forward, is to broaden their appeal,” said Materazzo, by matching the high mileage of a hybrid with better performance. 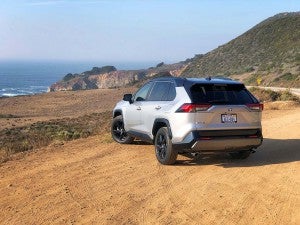 The new RAV4 hybrid is expected to comprise 25% fo all new RAV4 sales.

As is often the case, Toyota officials declined to discuss future products, but it would surprise few to see the Japanese giant take steps to improve the performance of the Prius, whether with a mid-cycle update or when the familiar hybrid undergoes its next complete makeover in a few years. When that happens it is expected to adopt the latest-generation of the Toyota Synergy Drive system, a version of which is debuting on the new RAV4.

Toyota’s upscale brand Lexus has also been pushing for more performance out of its most recent hybrids. The marque’s sportiest model, the LC, is offered with either a conventional 5.0-liter V-8 pumping out 471 horsepower, or a hybrid driveline relying on a 3.5-liter V-6 and twin electric motors making a combined 354 hp. Despite the lower number, however, the HEV version manages to launch from 0 to 60 in just 4.7 seconds, a mere 0.2 seconds slower than the V-8 model.

And, of course, Toyota isn’t the only automaker taking a different turn with its electrified powertrains. Alfa Romeo plans to launch two flagship models over the next several years, both relying on plug-in hybrid drivelines. Going forward, such PHEV systems will serve as the highest-performance options for most, if not all products sold by both Alfa and sibling brand Maserati, according to Fiat Chrysler Automobiles Vice President Tim Kuniskis.

This directional shift is expected to spread throughout the industry, experts tell TheDetroitBureau.com, reflecting the fact that electric motors deliver significant levels of immediate torque, not having to wait to rev up like conventional internal combustion engines. The challenge will be to continue delivering great mileage, as well. Toyota’s new RAV4 shows how both can be delivered with the same package.