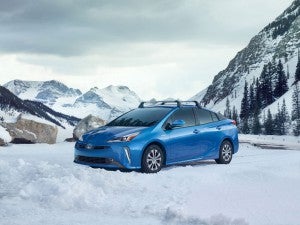 The 2019 Toyota Prius AWD-e uses four electric motors on each will to up the power and efficiency.

What do you do when you have the best-known and best-selling hybrid in the world? Toyota made the newest Prius more … capable.

Not only can you get places cheaper, in the 2019 Prius AWD-e, you can get to more places cheaper with the car’s new AWD-e system. Toyota officials claim that new Prius AWD-e will lay claim to being one of the most fuel-efficient all-wheel-drive-equipped passenger cars available in the U.S.

Toyota is projecting mpg estimates of 52 mpg city/48 mpg highway/50 mpg combined. Apparently, the Japanese automaker believes that “go anywhere” capability is the secret sauce as Toyota estimates that the AWD-e model could account for as much as 25% of annual U.S. Prius sales.

What doe the “e” mean in Prius-e? Well, “e” means electric, of course. In this case, it refers to the automatic on-demand system relies on an independent electric, magnet-less rear motor to power the rear wheels.

(Is Toyota next to pare back its passenger car line-up? Click Here for the story.) 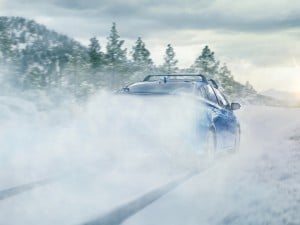 The fourth-generation Prius offers plenty of capability for drivers.

The Prius AWD-e uses an independent electric, magnet-less rear motor to power the rear wheels from 0 to 6 mph, then when needed, up to 43 mph. This system provides the plenty of punch to dash away from a stop, and when to use just two-wheel drive to keep it at peak fuel efficiency.

If the new Prius-e can travel to more places than ever, Toyota’s wisely made it easier to identify dropping the numeral-based identifiers in its name for more conventional nomenclature associated with the brand: L Eco, LE, XLE and Limited.

Toyota offers Prius in two new colors for 2019, Supersonic Red and Electric Storm Blue. The AWD-e model will be offered in LE and XLE grades and will debut a new two-tone 15-inch alloy wheel. The AWD-e models use a newly developed compact Nickel-Metal Hydride (Ni-MH) battery that is designed to provide excellent performance in cold-weather conditions.

The AWD-e battery fits under the rear seat area and does not impact the luggage capacity. The FWD models will tout a Lithium Ion battery. The result of this layout means that the Prius-e retains the same interior space as previous models.

(Click Here for more about Toyota improving the performance of its vehicles.) 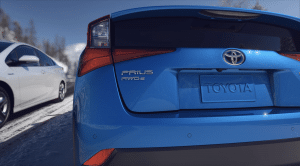 The new Prius AWD-e badge on the rear of the new model.

Because all Prius models, under certain circumstances, can operate in battery mode alone, during which they make little to no noise, they incorporate a Vehicle Proximity Notification System to help alert pedestrians and cyclists.

The Prius AWD-e shares the Hybrid Synergy Drive system with other Prius models. The system combines the output of a 1.8-liter 4-cylinder gasoline engine and two motor/generators through an electronically controlled planetary-type continuously variable transmission.

(To see more about the new 2020 Toyota Corolla, Click Here.)

The 2ZR-FXE 1.8-liter 4-cylinder gasoline engine is itself a paragon of high efficiency. Thanks to ultra-low internal friction and efficient combustion, it exceeds 40% thermal efficiency, which is among the highest in the world for a gasoline engine. No pricing was made available for the new Prius models.