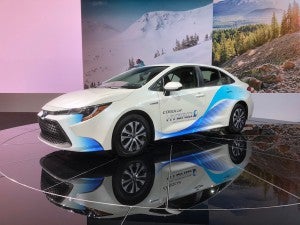 The new 2020 Toyota Corolla Hybrid is expected to get more than 50 mpg.

Toyota is known for its leadership in the hybrid marketplace with the Prius, especially with its newest model, the Prius AWD-e that debuted at the L.A. Auto Show; however, it wasn’t the only new hybrid on display, the Corolla hybrid made its premiere as well.

The big news on the Corolla was the complete exterior redesign it received for the 2020 model year, but lost in the hubbub was the fact that it also gets a hybrid version of the old reliable compact that’s been bouncing around for more than two decades.

The new Corolla hybrid gets at least 50 mpg combined fuel economy, according to Toyota’s projections, making it the most fuel-efficient Corolla to ever.
In addition the hybrid model adapts the latest Toyota Hybrid Synergy Drive from the new-generation Prius, already proven as an MPG winner, says Toyota. “Only Toyota offers such a distinct choice of hybrids in this vehicle segment, thus catering to customers who have different tastes in design but the same desire for maximum fuel efficiency.”

(In an SUV market, Toyota intent on boosting demand for Corolla. Click Here for the story.)

Like all of the other Corollas, the hybrid benefits from the brand’s latest advances in comfort and multimedia technology. As on the 2020 Corolla gas models, the Toyota Safety Sense 2.0 suite of active safety systems comes standard.

As for what’s powering everything, Toyota’s new new hybrid system combines a 1.8-liter four-cylinder gasoline engine with two motor/generators through an electronically controlled planetary-type continuously variable transmission (CVT) transaxle. The result is an output of 121 horsepower that is available almost immediately. 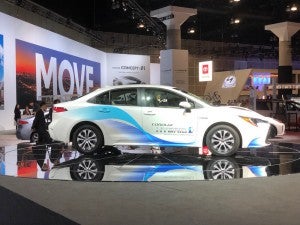 The Corolla Hybrid uses a new battery technology that allows the packs to lay flat and be stores under the seats of the new model.

The Corolla doesn’t have that herky jerky take off that can startle some drivers new to battery-electrics, instead its preload differential doles out power quickly, but smoothly giving the driver plenty of oomph from a dead stop.

(Click Here for more about the new Prius AWD-e.)

The engine, working in concert with the electric motor (MG2), assures responsive performance, while exemplary energy efficiency is achieved by using both electric motors (MG1 and MG2) for hybrid battery charging. 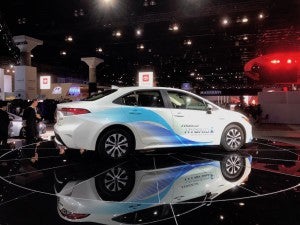 The Corolla Hybrid comes with a slew of infotainment and safety technology.

The hybrid comes with three driving modes: Normal, Eco and Sport, and each performs to description. Additionally, there is a regenerative braking system that helps charge the batteries while driving. The system is so efficient a driver could finish a trip with batteries fully charged.