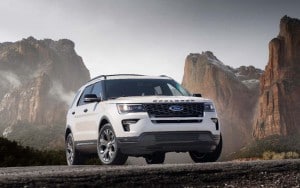 Ford's new SUV sales are on the rise, as is its average transaction price by $1,400 per vehicle.

Despite predictions of an overall decline, U.S. auto sales rose slightly in October, led by companies with shiny new sport-utilities and crossovers to offer buyers.

However, those more desirable vehicles combined with rising interest rates are resulting in new vehicle prices that are on the rise. This is likely, at least according to one automaker, put a dent in sales for the remainder of the year.

During its sales call, executives at Ford Motor Co. warned sales numbers will continue to fall in 2018, in part because of the rising interest rates pushing up prices.

“Interest rates are taking payments up along with our transaction pricing. So little bit of pressure there,” said Mark LaNeve, vice president, U.S. marketing, sales and service at Ford.

Ford’s transaction prices increased by $1,400 in October from a year ago, compared with $330 for the overall industry. The increase is driven by more expensive utility vehicles that in vogue now compared with sedans. Additionally, interest rates have spiked meaning a jump in the monthly payment.

The annual percentage rate (APR) on new financed vehicles averaged 6.2% in October, a 1.3% increase from a year ago, a 2% increase from five years ago, and the highest level on record since January 2009.

“We haven’t seen interest rates hit the 6% mark in nearly 10 years, and zero percent finance loans have been cut down by nearly a third of where they were in 2016,” said Jeremy Acevedo, Edmunds’ manager of industry analysis.

(Click Here for the speculation that October sales would fall.)

“It’s getting harder and harder for shoppers to afford a new car, and if the economy starts to slip, we’re at a point now where we really could start to see some significant impacts in the auto market.”

The average new-car buyer will pay $1,316 more in interest over the life of the loan if the individual bought a car this past October compared to October of 2017 (taking into consideration average loan term lengths, average amount financed, and average APRs). Shoppers with lower-than-average credit scores could pay even more.

(To see what automakers are bringing to SEMA this year, Click Here.)

Another issue in the rising price of new vehicles is that automakers are simply loading them up with goodies that buyers like. “In the immediate term, average transaction prices continue to rise as a result of the shift and on more heavily contented vehicles, which puts automakers in the position of being able to boast higher quality sales and take some focus off pure volume increases,” said Stephanie Brinley, IHS Markit principal automotive analyst.