Kia Has More Soul(s) Than Ever

Quirky crossover now available in a variety of distinct forms. 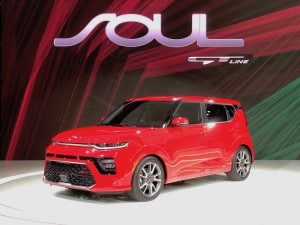 Kia now boasts six versions of the Soul crossover for 2020, including the new GT model.

Consider it food for the Soul: Kia has introduced six distinct new flavors of its quirky Soul crossover.

The car that showed us boxy can be beautiful will be back in an all-new form next year and Kia hopes to increase its appeal by adding new versions, including the GT and X-Line, while improving the appeal of the Kia Soul EV by boosting range and speeding up its charging system.

“The Soul has been a massive success since its introduction, establishing itself as an automotive icon with its fun-loving character and eccentric style,” said Orth Hedrick, product planning chief for Kia Motors America. “Even with a new generation of competitors crowding the marketplace, the all-new Soul will once again prove to be a tough contender, with its unparalleled style and impressive level of technology and customization options.”

“Kia will improve the Soul’s refinement and technology, but it will maintain that basic recipe that has served the model so well” with the 2020 remake, said Karl Brauer, an analyst and editor with Kelley Blue Book.

For those familiar with the unique look of the original Soul, Kia has managed to retain its familiar cues while clearly updating the car’s appearance. The body is a bit more sculpted than the boxy original and second-generation versions. And the taillights now flow into the roof, Up front, it gets a complete redesign of the headlights which frame a new take on Kia’s trademark “tiger-nose” grille. 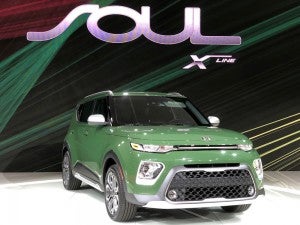 First launched in 2009, the crossover became an almost immediate hit. But unlike other boxy models, such as the old Scion xB and Nissan Cube, the Kia Soul has managed to retain its appeal. In fact, it was the third best-selling model in the Korean carmaker’s U.S. line-up, with American buyers snapping up more than 85,000 of them through the end of October.

While the third-generation Soul might look familiar, the new version actually gains 2.2 inches nose-to-tail, the wheelbase growing 1.2 inches. The interior offers more space for passengers, as well as an additional 5 cubic feet of cargo space. You can more easily load and unload your stuff thanks to a wider and lower tailgate.

Inside, the 2020 Kia Soul is a bit more refined, now offered with both a 10.25-inch touchscreen and a heads-up display. There’s an upgraded new audio package and the car now gets Apple CarPlay and Android Auto.

The Turbo Soul retains its 1.6-liter twin-scroll engine which punches out 201 horsepower and 195 pound-ft of torque through a seven-speed dual-clutch transmission. The alternatives include an all-new 2.0-liter inline-four producing 147 hp and 132 lb-ft. 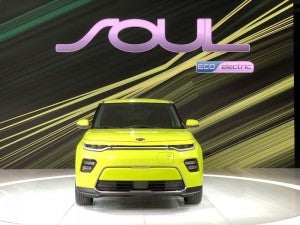 The Kia Soul EV is looking to compete with the Chevy Bolt and its 64 kW battery. Updated for 2020, expect range of about 200 miles.

The 2020 Kia Soul EV, meanwhile, now gets a 64 kilowatt-hour lithium-ion battery pack. The automaker says it is still working to ascertain range but with the pack about the same size as that used by the Chevrolet Bolt EV, something on the order of 200 miles or more seems likely.

The Soul EV now makes 201 hp and 291 lb-ft of torque which means it will deliver the sort of instant acceleration that battery-car fans enjoy.

A new Combined Charging System DC fast-charger, meanwhile, should trim charging times, especially when connected to a Level 3 charger. The brake regeneration system, meanwhile, is adjustable, with more aggressive settings letting a motorist do a bit of one-foot driving. And the “Brake and Hold system, the automaker explains, “allows the car to be stopped only using the paddles on the wheel.

Look for the various versions of the 2020 Kia Soul to reach U.S. showrooms by the middle of next year.