3-Row, 8-seater is next in a wave of utes coming from Korea. 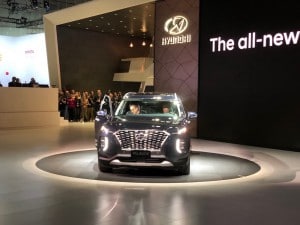 The 2020 Hyundai Palisade give the company an eight-passenger SUV to compete with the big boys.

Hyundai is racing to make up for lost time. The Korean carmaker has been slow to embrace the rapid transformation of the American market, motorists by the millions switching from cars to light truck. But it is launching its third new SUV of the year at the Los Angeles Auto Show.

The 2020 Hyundai Palisade, which goes on sale next summer, is the biggest SUV the carmaker has ever offered – with three-row seating for up to eight adults. It’s also the most lavishly equipped, with an outsized array of creature comforts and safety features that could surprise anyone who still thinks of Hyundai as an economy brand.

With even more to come, “There’s no question about it. We’re in the SUV game big time,” said Brian Smith, Hyundai’s U.S. chief operating officer, during the debut of the Palisade at the Los Angeles Convention Center.

The Palisade will replace the brand’s smaller, three-row version of the Santa Fe, the XL, when it rolls into U.S. showrooms. At 196.1 inches, nose to tail, it adds another three inches outside – and even more in the cabin – while also gaining 2.4 inches in height and 3.6 inches in width, compared to the Santa Fe XL. To put that into perspective, it’s slightly longer than a Toyota Highlander, though shorter than the recently updated Honda Pilot or the Ford Explorer. 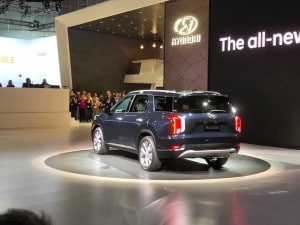 The new Palisade offers a slew of creature comforts, including 16 cupholders and nearly as many USB ports.

Hyundai went for a design with a big presence, opting for something a little more like a classic SUV than a swoopy soft-roader. Nonetheless, it’s not just a big box, with the familiar Hyundai cascading grille and just enough curves, suggested design chief SangYup Lee, to give it a “sensuous sportiness.” What Lee described as “alligator eye” headlamps are framed by LED running lights. Upper-trim models are fitted with LED lights all around and one of the many smart features of the 2020 Hyundai Palisade is automatic high beams.

Other standard advanced driver assistance systems include forward collision warning with pedestrian detection and automatic emergency braking, blind-spot detection, lane-following assist, active cruise control and something parents will appreciate: a system that can prevent kids from opening the big door into oncoming traffic.

The cabin is well equipped, as well, with a plethora of USB ports for everyone to plug into. There are 16 cupholders and lots of storage space. By opting for an electronic shifter, Hyundai even freed up enough space under the gear lever for a woman to stow a pocketbook.

The instrument cluster is a 12.3-inch digital display, with a 10.25-inch touchscreen handling navigation and infotainment duties. There’s even an intercom system for those up front to easily chat with back-row occupants.

And Hyundai took steps to make it easier for even adults to get in and out of those back seats. There are also push-button controls near the powered hatch to drop both the second and third rows for more cargo space. The tailgate itself can detect when someone with the key fob is standing there waiting with their hands full. No need to waggle a foot under the bumper, even. 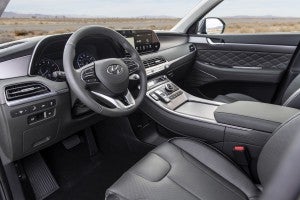 The interior of the new Palisade is on par with its competitors.

The new Hyundai Palisade is powered by a 3.8-liter V-6 making 291 horsepower and 262 pound-feet of torque. That e-shifter operates an eight-speed automatic. And buyers can choose between front- or all-wheel-drive. The SUV is capable of towing up to 5,000 pounds and it can be outfitted with a Class 3 hitch.

Hyundai won’t release two sets of important numbers until closer to the Palisade’s on-sale date: its EPA mileage ratings and its price. But while the automaker is no longer offering the fire sale prices of its early years it still tends to undercut similar products from U.S. and Japanese competitors.

The Palisade should be critical for Hyundai, company officials said, and with the addition of the new Kona and other SUVs, COO Smith said he expects light trucks to account for 55% of the company’s U.S. sales next year, up from 40% in 2016. But it won’t stop there, with another SUV planned to join the Hyundai line-up in 2020.