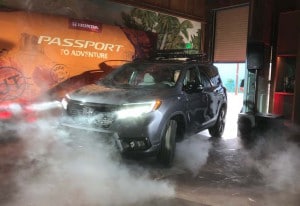 Honda filled a gap in its SUV line-up, unveiling the new Honda Passport in Los Angeles.

Wherever you want to go, Honda has a product for you, something the automaker took pains to point out during an advance look at two new offerings that will officially be unveiled at this year’s Los Angeles Auto Show.

That includes not only the all-new Passport SUV, but the Talon, a sporty offering targeting the increasing market for extreme off-roaders that allow passengers to sit side-by-side.

But it’s the five-passenger SUV that is likely to draw the broadest attention, coming at a time when utility vehicles account for roughly half of all new automobiles sold in the United States, with demand only continuing to rise at the expense of traditional passenger sedans.

Set to slot in between Honda’s CR-V and Pilot models, the new Passport revives the name of what was Honda’s first-ever utility vehicle, Henio Arcangeli, the U.S. head of the Honda brand, noted during an event in downtown Los Angeles a day before the SUV’s official unveiling at the L.A. Auto Show. The original five-door was produced by erstwhile rival Isuzu and sold in the U.S. under the Honda badge between 1993 and 2002.

As with the latest-generation Pilot, which was launched earlier in the 2019 model-year, Honda aims to position the new Passport as more than just another “soft-roader.” While it relies on a car-like, unibody platform, an approach shared with most of today’s utility vehicle, Passport also has a boxed frame section intended to give it improved capabilities when driven off-road. But the automaker claims it also will deliver more mannered on-road characteristics than classic, truck-based SUVs.

Set to reach market next year, the Passport is intended to be a bit more “personal sized” than the big Pilot, suggested Jay Joseph, a senior Honda product planner. That said, he emphasized that Passport will offer the biggest interior in its class, with 115.9 cubic feet of space for passengers and another 41.2 cubic feet for cargo, with the rear seats in their upright position.

The new utility vehicle will offer a wide range of features, including the Honda Safety Sensing suite of advanced driver assistance technologies on all versions. That includes such features as forward collision warning with automatic emergency braking.

More up-market versions of the Honda Passport will add things like full LED lighting, a birdseye-view camera system, WiFi, and even the ability to automatically download updates for the vehicle’s software.

Passport will be powered by a 3.5-liter V-6 engine making 280 horsepower and 262 pound-feet of torque. And it will be offered with an optional all-wheel-drive system capable of torque-vectoring. It will have the capacity to tow 3,500 pounds, though an optional towing package will boost that to 5,000 pounds.

The Passport will ride an inch higher than the Honda Pilot and, to enhance its off-road capabilities, the new SUV will feature a four-mode control that can instantly adapt key vehicle functions for conditions like snow, sand or mud and ruts.

But don’t expect the new Honda Passport to take on roads nearly as severe as those tackled by the new Talon.

(To check out our first drive in the 2019 Honda Accord hybrid, Click Here.)

Honda has had a series of hits since entering the off-road side-by-side market a few years back. It is now tackling a new segment with this sportier two-seat model that measures barely 64 inches, front-to-back, and is powered by a 990 cc engine paired with a dual-clutch gearbox. Honda is the only manufacturer to use DCT technology in an off-roader, officials pointed out.