Soon after Tesla first introduced its Autopilot system in October 2014, videos began popping up on YouTube showing owners doing things like jumping into the back seat while their cars cruised down the highway. Even Tesla CEO Elon Musk was shown in his Model S sedan, hands out of the window, rather than on the steering wheel.

After a couple high-visibility crashes, Tesla now takes pain to make sure its owners know Autopilot isn’t a fully autonomous system – at least not yet. But not everyone seems to be getting the message. And it’s not just Tesla. With Nissan adding ProPilot Assist to some new models and Volvo opting for Pilot Assist.

The new car market is experiencing a flood of new advanced driver assistance systems, or ADAS, that claim to help drivers stay in their lanes, brake automatically, and even change lanes by simply tapping the turn signal. But testing by AAA finds that many of these systems don’t work as promised – at least all the time. And, worse, the names manufacturers have chosen may lead to a false sense of security, some motorists believing these systems can but drive all but fully autonomously.

AAA found that 40% of the vehicles using words like “pilot” in their name can do significantly more than what such technology is currently capable of.

“These systems are made as an aid to driving, they are not autonomous, despite all of the hype around vehicle autonomy,” said Greg Brannon, AAA’s director of automotive engineering. “Clearly having ‘pilot’ in the name may imply a level of unaided driving, which is not correct for the current state of the development of these systems.” 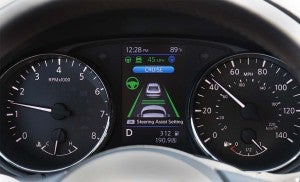 The ProPilot Assist display indicates when the system sees highway lane markers and is active.

Compounding the problem, some of the newest ADAS systems can’t even consistently accomplish what they’re advertised to do, such as keeping a vehicle centered in its lane. The travel and safety organization took four current models – a 2018 Mercedes-Benz S-Class, a 2018 Nissan Rogue, a 2017 Tesla Model S and a 2019 Volvo XC40 – for testing on a closed loop course and found they “struggled” during relatively commonplace situations, including moderate traffic and curvy roads.

“Both real-world and closed-course testing exposed separate yet equally serious limitations with these systems,” said Brannon. “It reinforces that there is still much work to be done to educate consumers on the nuances between system names and functionality and that it is much too early to refer to these vehicle technologies as automated.”

The new AAA study is not the first to raise concerns about the capabilities of ADAS technologies now on the road. The Insurance Institute for Highway Safety raised similar concerns in a report it issued in August.

(And TheDetroitBureau.com has found similar problems with a number of more advanced ADAS systems, such as those intended to keep a vehicle centered in its lane, and not just issue an alert when it crosses the divider line. In a number of instances, a Nissan sedan with ProPilot Assist drifted out of its lane in sharp corners, even on Interstate-class freeways. Several other vehicles with similar technology experienced the same problem.)

(Click Here to see how highway fatalities could again top 40k this year.) 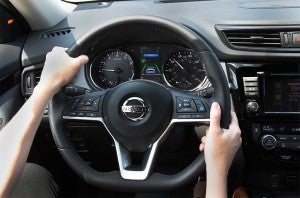 Nissan's ProPilot Assist still requires the driver to keep their hands on the wheel.

“If the systems seem too capable, then drivers may not give them the attention required to use them safely,” said IIHS chief researcher David Zuby, in the IIHS report.

Such problems have been highlighted by several Tesla crashes, including one that saw driver Walter Huang killed in California last March. The Model X did signal for Huang to retake control of the vehicle in the seconds before the crash but he failed to do so. Several other incidents have found that Tesla’s Autopilot may sometimes have trouble detecting when one of its vehicles is approaching a stopped car or another fixed object, a concern raised about several other ADAS systems.

“With today’s exciting advances in vehicle technology, there is a greater need for naming that clearly signals to a driver what the system does,” said AAA’s Brannon. “Vague or confusing terminology may lead someone to overestimate a system’s capability, unintentionally placing the driver and others on the road at risk.”

(To see why IIHS claims advanced driver assistance systems could cause, not prevent collisions, Click Here.)

AAA, along with IIHS and several other auto safety groups, has issued a call for automakers to standardize the names they use for individual driver assistance systems, such as automatic emergency braking and blind-spot monitoring, so that consumers have a realistic view of what those technologies can and can’t do.