Update: Ford rules out merger or equity swap with VW.

Ford Motor Co. entered into a MoU with Volkswagen AG to work on some undetermined projects.

(This story has been updated to reflect comments from Ford ruling out a merger or equity swap.)

Like many an automotive manufacturer, Ford Motor Co. has been forming alliances with erstwhile rivals such as General Motors in a bid to reduce development costs and speed new products to market. But one potential partnership has been generating widespread buzz in industry circles, observers wondering just how far Ford might take things with German giant Volkswagen AG.

The two companies inked an MoU, or memorandum of understanding, announcing they will explore a number of possible projects, including the joint development and production of commercial vehicles.

But industry analysts are now suggesting such a partnership could reach far beyond the commercial vehicle market, some even wondering whether there could be full-fledged merger or, at the least, an equity swap, in their future.

When it announced the MoU last June, Jim Farley, Ford’s president of Global Markets said, “This potential alliance with the Volkswagen Group is another example of how we can become more fit as a business, while creating a winning global product portfolio and extending our capabilities.” The goal would be “to improve our effectiveness and efficiency.”

How far might the two go? “We are not considering any equity swap or cross-ownership,” Mark Truby, Ford’s head of communications, told TheDetroitBureau.com, clearly intending to squash such rumors. Despite that unequivocal denial, not everyone is convinced that, given enough time, such options might not be, at the very least, discussed.

(Ford promises to be more transparent during turnaround. Click Here for the story.) 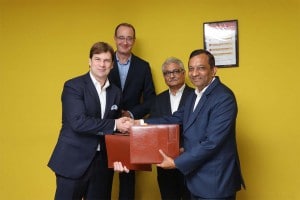 Ford has several partnerships, like the one with Mahindra officials, including Ford Global Markets Pres. Jim Farley, (l), celebrate the signing of their new alliance.

A deal with Volkswagen would be just one of several alliances Ford has entered into in recent years. One of the most notable saw it team up with General Motors to work on new, fuel-saving nine and 10-speed automatic transmissions. But the project was limited to the most basic levels of research and development. When it came time to take the gearbox architecture and get it ready for production, the partnership came to an end, each manufacturer making significant tweaks to both hardware and controlling software.

On a broader scale, Ford earlier this year also revealed plans to pair up with one of India’s larger automakers, Mahindra & Mahindra, to develop a new range of sport-utility vehicles, as well as a battery-car specifically earmarked for that fast-growing market. That deal also offers room for growth as Mahindra – a company that specializes in pickups, SUVs and off-road vehicles – is looking to enter the U.S. market, recently launching a small plant in the Detroit suburbs.

But it’s the potential of the Ford-VW relationship that has set gossips going. The timing is particularly significant. On the Detroit automaker’s side, Jim Hackett, who was appointed CEO last year, faces a series of major challenges. He has been working on what insiders describe as a “radical” transformation of the company. That includes a push into electrified and autonomous vehicles and an expansion of its light truck portfolio – even as Ford all but abandons traditional sedans and coupes in the U.S. market.

The reaction to Hackett’s still-forming strategy has been tepid, at best. Ford’s stock slid well $10 a share mid-summer and has been hovering below $9 this past week. 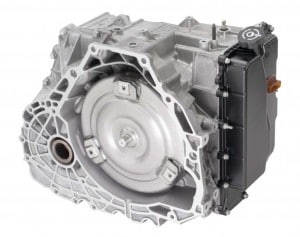 GM and Ford have formed a new alliance to develop a high-mileage 10-speed.

Ford does have some clear strengths. It’s F-Series pickups make up the best-selling model line in the U.S. market and other light trucks, such as the newly redesigned Edge, are also strong sellers.

But it is particularly weak in several markets, including Europe, Latin America and China, where Volkswagen is strong. The German company is, in fact, number one in China and that cemented its position as the world’s best-selling automaker in the world for the first nine months of this year.

On the other hand, VW is particularly weak in Ford’s home market. It has rebounded in the U.S. slightly as it moves past its diesel emissions scandal but still lags well behind key Asian imports, such as Toyota, Nissan, Honda and Hyundai.

(Click Here for more about the Ford and Mahindra partnership.)

Even the original areas of cooperation outlined by the Ford-VW MoU could fail to materialize, of course. “For all the deals we’ve discussed with potential partners, only a handful have actually ever worked out,” said a senior exec with a Ford domestic rival, asking not to be named.

On the other hand, observers note that there are a number of gaps in each others’ line-up that could be filled by sharing products or the underlying platforms. VW, for one thing, is making an extremely aggressive push into electrification, an area where Ford was a pioneer but now lags behind.

Could things push even further? Some observers have suggested Volkswagen might want to snap up Ford considering its deflated stock price. Such a move likely wouldn’t sit well with the U.S. automaker’s controlling Ford family, heirs of founder Henry Ford. The company was the only member of Detroit’s Big Three not to declare bankruptcy during the Great Recession and insiders say one reason was that such a move would have eliminated the family’s control of the company.

The comments by Ford communications chief Truby make it clear that the Ford family and the company’s top management team don’t want to look beyond a limited alliance of convenience.

Beyond the issue of control, another concern would be one of merging two very distinct corporate cultures. The potential problems became readily apparent when what was then Daimler-Benz AG formed the ill-fated “merger of equals” with Chrysler that became DaimlerChrysler.

An alternative scenario is now playing out between what is now Daimler AG and the Euro-Asian Renault-Nissan Mitsubishi Alliance. Over the past nine years, the two groups have participated in a variety of projects, ranging from joint parts purchasing to product development. Several products sold by Nissan’s luxury division Infiniti are based on Mercedes platforms. The Mercedes C-Class assembled in Alabama uses Infiniti engines. And the two luxury brands share a new plant in Mexico, among other projects.

A Ford-VW relationship could see a limited equity swap akin to what happened when Renault helped bail out then-faltering Nissan 20 years ago, but it would be more likely to go the route that Daimler has taken with the R-N-M Alliance.

What seems clear is that talks between the two companies are occurring at an opportune time, especially for Ford, where Hackett continues pulling together a strategy that will address some serious challenges.

Where the two takes things – if they move forward at all – could become apparent in the coming months, many observers are betting.