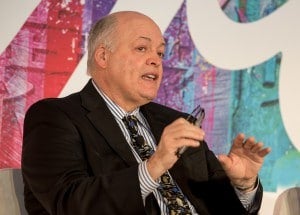 Jim Hackett, Ford president and CEO, said the company is continuing to engage in its transformation efforts.

The income drop was primarily driven by what the company described in its earnings release as “continued challenges in China. In North America, the company delivered an 8.8% EBIT margin, supported by more than $1 billion of improved mix, thanks to the continued shift towards utilities and trucks, as well as high-end trim models.”

“This quarter shows that our business remains very strong in key areas. We continue to make progress on our efforts to redesign Ford to be far more competitively fit, disciplined in capital allocations and nimble enough to win in a fast-changing world,” said Jim Hackett, Ford president and CEO.

“With products like the Edge ST and Ranger launching in the United States and the Territory SUV in China, we are also building momentum shifting our product portfolio to build on our strengths and meet shifting consumer demand,” Hackett said.

Ford’s earnings before interest and taxes was driven by the North America business, with nearly $2 billion of EBIT, an improvement of $136 million year over year, despite lower volume and higher commodity costs, supported by a share increase for the F-Series, record transaction pricing for Super Duty and higher sales of SUVs.

“This quarter we achieved a North America EBIT margin of nearly 9% and the best quarterly result in Ford Credit in more than seven years, while teams across the company continue to aggressively improve the operational fitness of the business,” said Bob Shanks, executive vice president and CFO.

“Our balance sheet remains robust, with more than $23 billion of cash and more than $34 billion of liquidity. The company remains on track to achieve full year adjusted EPS of $1.30 to $1.50.”

Outside of North America the company had a $558 million EBIT loss, slightly improved from the second quarter, despite lower volume. Ford’s EBIT loss in South America totaled $152 million, compared with a $2 million in the third quarter of 2017.

“In all regions, teams continue to work to improve the operational fitness of the business, while building on core company strengths. In Europe, the share for commercial vehicles improved to 15.4%, a record quarter, as the region continues to build on its commercial vehicle success,” Shanks said.

Ford’s balance sheet remains strong, with $23.7 billion of cash and $34.7 billion of total liquidity. Ford is also reaffirming adjusted EPS guidance for the full-year in the range of $1.30 to $1.50 and positive cash flow that will be lower than 2017.

(To see more about Ford officials pledging to be more transparent during turnaround, Click Here.)

Ford also said that as a result of the higher costs and uncertainty impacting the entire sector, coupled with unexpected deterioration this year in the Europe and China business, current company forecasts show that it will not reach its previously announced 8% EBIT margin or high teens ROIC targets by 2020. However, the company continues to attack costs, increase the operational fitness of the business and remains committed to hitting these targets over time.