Volkswagen Reveals $6B “Electric for All” Plans 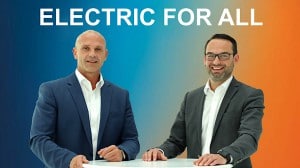 Volkswagen AG is readying to kick off its long-expected onslaught of electric vehicles from its MEB platform, revealing an investment of more than $6 billion for plant upgrades to produce more than 10 million EVs by the end of 2025.

The moves are part of what VW dubs its “Electric for All” plan, based off the flexibility of its modular electric drive, or MEB, platform. It’s expected to the base for as many as 27 model between now and 2025.

“We will make electric vehicles popular and get as many people as possible excited about electric cars,” said Brand Board Member for E-Mobility Thomas Ulbrich. “The MEB is one of the most important projects in the history of Volkswagen – a technological milestone, similar to the transition from the Beetle to the Golf.”

The automaker first plans to produce a five-door hatchback that will be ready for sale in late 2019. It’ll produce that vehicle at the Zwickau plant, after it plows more than $1.3 billion into for upgrades, according to VW.

(Bye-bye Beetle. Click Here for more about the end of the icon.) 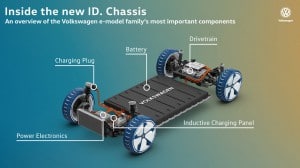 Volkswagen's ID chassis will be the base for many of the automaker's electric vehicles in the next three years.

VW officials said they expect to be selling 150,000 EVs annually by the end of 2020, with 100,000 of those coming from the I.D. line-up. The rest of the sales are expected to come from the e-Golf and other battery-electric offerings from the company.

The German automaker expects a 10-fold growth in I.D. sales, climbing to 1 million I.D. vehicles per year by 2025.

“The ID will be a milestone in technological development. It will be the first fully connected electric car with full everyday utility that millions of people will be able to afford,” Christian Senger, head of the E-mobility Product Line, explained, the MEB platform brings significant benefits for customers.

(Click Here for more about VW’s plans for the future.)

One of the MEB’s advantages is its flexibility, which will make it possible to install larger batteries, Senger noted, that could significantly improve the range of the vehicle. Designed to be an electric platform from the beginning, the MEB loads its floor with batteries, shifting the center of gravity lower and helping the ride and handling characteristics of the vehicles built off the technology. 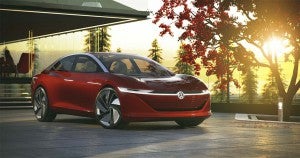 The Vizzion Concept is set to become the fourth model in the new Volkswagen I.D. sub-brand.

“The car holds the road really well thanks to the flat battery in the floor pan and the space inside is much more generous – we are making substantial headway with the sense of spaciousness,” Senger said.

The platform is currently designed for a vehicle about as long as a current VW Golf with interior room on par with a Passat. The flexibility comes into play with the type of vehicles that can be manufactured on the platform ranging from a smaller Golf-style hatch up to the Microbus concept shown recently that VW is bringing back as a battery-electric minivan.

“Our Modular Transverse Toolkit already proved Volkswagen is one of the most successful platform developers in the auto industry. Now, we’re transferring this know-how and this strategy to the electric age. By the end of 2022, four Group brands will be ramping up 27 MEB models worldwide, ranging from compact cars to the lifestyle Bulli. That is something quite unique,” Ulbrich said.