The Beast is Loose: New Presidential Limo is on the Prowl

Over-sized Cadillac set to give Pres. Trump his first ride to UN. 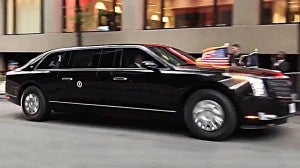 The new version of "The Beast," the nickname for the presidential limo, roamed the streets for the first time in New York City.

There’s a beast on the prowl in Manhattan. Make that “The Beast,” the nickname that’s been used for years to describe the heavily fortified limousines used for U.S. presidents. An all-new version, a specially designed Cadillac, made its debut on the streets of New York City Sunday and will be put to work on its first official assignment chauffeuring President Donald Trump to the United Nations Tuesday.

This marks the first time the president has gotten new wheels since President Barack Obama was inaugurated back in January 2009, and it’s the product of a $15.8 million contract that General Motors won back in 2014.

At first glance, The Beast picks up on the Art & Science design cues used for more conventional Cadillac CT6-based limos, but that’s where the similarities end. Under the black skin is a heavily fortified, truck-based platform that is capable of resisting some of the most aggressive threats a terrorist or assassin might try to use against the POTUS. There’s an array of electronic technologies to keep the president in constant contact, and special life-saving systems, the need for which was clearly demonstrated during the attack that nearly killed President Ronald Reagan in March 1981. 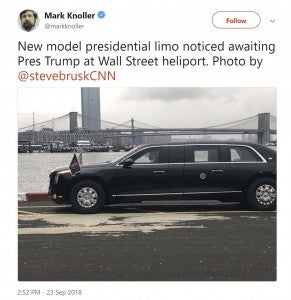 CNN's Mark Knoller caught a glimpse of The Beast during its inaugural trip to NYC.

William McKinley was the very first president to ride in an automobile in November 1899, though Teddy Roosevelt was the first to commission a government-owned car, a white convertible Stanley Steamer. But it was Roosevelt’s successor, William Howard Taft, who purchased four automobiles and converted the White House stables into a garage.

Through the 1930s, presidents rode in stock automobiles, but a vehicle dubbed the Sunshine Special was converted to let Franklin D. Roosevelt drive using hand controls due to the polio that left him with limited use of his legs.

Like many of the presidential vehicles before and after, the Sunshine Special was a convertible, a body style that allowed these politicians to come more in contact with the public. That all changed in Nov. 22, 1963, when Pres. John F. Kennedy was shot and killed while being driven through Dallas in a Lincoln ragtop. That vehicle was subsequently retrofitted with a hardtop for his successor, Lyndon B. Johnson.

And, ever since, the Secret Service has increased the protection and features offered by each new generation of presidential limousine. 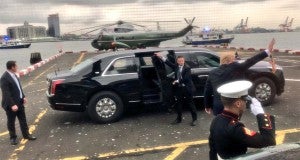 Reporter Dan Scavino tweeted this image of the new Beast as he arrived on Air Force 1.

With the latest version of The Beast, the Cadillac-styled body actually conceals a platform more like a truck-based Chevrolet Suburban. It is armored from top to bottom to resist any manner of potential threat, from small arms fire to rocket grenades and improvised explosive devices, or IEDs, like those frequently used in Iraq and Afghanistan.

Each threat presents unique challenges and, as a result, the body is believed to be as much as 8 inches thick and contain a mix of different types of steel, aluminum and ceramic armors. The windows are reportedly at least five inches thick and use multiple layers of glass that while not truly bullet-proof can resist multiple rounds of high-powered projectiles.

(Click Here to see how Caddy wanted to fill “limo gap” left by Lincoln and how things have changed.)

Inside, there is a state-of-the-art communications system that, among other things, would allow the president to activate the codes needed to initiate a nuclear attack. There’s also something of a mini-hospital, with extensive medical gear immediately at hand, along with a fire suppression system. The Beast is believed to seat seven, as did the previous presidential limo, though that includes members of the Secret Service who would serve as a last line of defense in case an attacker somehow was able to open up the limo. 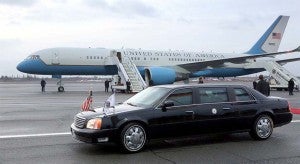 Like the new version of The Beast, the old presidential limo was designed to look like a Cadillac.

Before they could do so, however, they’d have a tough fight. According to various reports, The Beast is capable of using numerous counter-measures, some seemingly lifted out of a James Bond movie script, including smokescreens, tear gas and the ability to lay down an oil slick to send vehicles chasing it out of control. Even the door handles can be electrified to shock those who might try to get inside.

All that adds up to a significant amount of mass. The old presidential limo was said to weigh in at close to 20,000 pounds, and few expect the new vehicle to be any lighter. That requires a massive engine running on diesel – something that created a problem during a trip President Obama took to Israel when regular gasoline was inadvertently pumped into its fuel tank. The old model was believed to need about 15 seconds to hit 60, a performance number the Secret Service may have tried to improve.

Nonetheless, the suspension was designed not only to be robust enough to stand up to an attack but also to allow The Beast to perform some impressive driving maneuvers, if necessary, to make its escape. Run-flat tires, meanwhile, are meant to allow the limo to keep driving even if they’re blown out.

To get the Beast in place, meanwhile, the Secret Service operates a special C-17 Globemaster aircraft. It also carries a second limo and a special communications vehicle that rides along in the presidential motorcade.

The POTUS isn’t the only head-of-state to have his own special limousine, of course. Russian President Vladimir Putin recently received an upgrade, a specially developed, Russian-made model. Chinese President Xi Jinping was spotted driving a new, Chinese-made limo during a trip to Africa last month. And Trump reportedly showed off the outgoing presidential limo to Kim Jong Un, the head of North Korea, during their summit meeting in Singapore. Kim is known to be something of a gearhead but has to settle for using a decade-old, modified Mercedes Pullman Guard for his official duties.