Entrepreneur liked to "dream of the impossible." 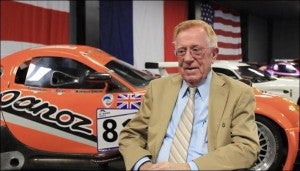 Racing legend Don Panoz, here in front of many of his cars, died after a short illness

He made a considerable fortune helping millions of people stop smoking, though he never gave up the habit himself. Don Panoz then used that money to fuel another addiction: high-speed automobiles.

Not all his efforts were as successful as the transdermal patch, but he continued to venture into unusual territory with projects like the DeltaWing until the end of his life. Panoz passing away on Tuesday after a brief illness at the age of 83.

Panoz was an unlikely force in the automotive world. A U.S. Army veteran, he started out as a pharmacist, operating two drug stores in Pittsburgh while studying at Duquesne University. In 1961, he and partner Milan Puskar formed what was to become Mylan Pharmaceuticals, the company developing a system for slowly releasing medications into the body through a transdermal patch. The device became best known as a way of delivering nicotine to smokers to help them quit smoking.

Ironically, “It didn’t work for me,” said Panoz, during a dinner in New York City, some years back, as he lit up the latest in a chain of cigarettes.

(Victory, defeat – and plenty of surprises – at the Rolex 24 Hours at Daytona. Click Here for the story.)

It may not have helped him kick the smoking habit but “the patch” did deliver him a massive fortune estimated at more than $500 million. 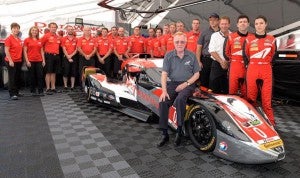 He wasn’t reluctant to spend that on his passions, including a massive estate and resort complex near Atlanta, Chateau Elan, where guests at his hotel were greeted by a massive painting of Panoz and his wife. It even operated Georgia’s largest winery.

“He set the standard for how to do big, cool stuff that people would like to see,” Tom Slick, another Georgia winery operator told the Atlanta Journal-Constitution.

But the entrepreneur’s real love was the automobile and, in particular, racing, a field that he entered along with son Danny. And, over the years, he touched the field in a variety of ways, making several quixotic efforts to challenge the automotive establishment.

That included the launch of several vehicles of his own design, including the front-engine Esperante GTR-1 race car. It was the first of its type to use a battery-hybrid system to reduce fuel consumption and improve performance. Today, that technique is commonplace in Formula One and other racing series.

Perhaps his most daring project was the development of the DeltaWing, a dart-shaped vehicle designed to deliver unheard of aerodynamics and, by slashing its weight, take on far more powerful competitors. Initially working with Nissan, the DeltaWing made a failed attempt at the 24 Hours of Le Mans. The partners eventually had a falling out which led to some angry legal wrangling.

(Click Here for more about the DeltaWing’s new GT Concept.)

Panoz continued to fund development, however, in October 2015 revealing what was billed as a prototype for a street-level version. “This is an important point in the DeltaWing project’s next phase,” the then 80-year-old Panoz said. But the venture was scrapped little more than a year later.

He first got involved in racing to support his son Danny, but quickly developed his own passion for the sport. Together, they had a penchant for stepping in and staking some of his fortune to prop up struggling ventures, including IMSA, later renamed ALMS, short for American Le Mans Series. They also operated several different race tracks throughout the years, including Road Atlanta and the historic Sebring. 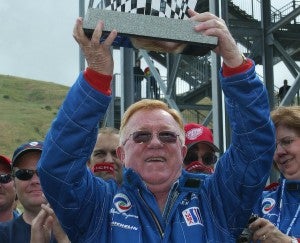 Georgia entrepreneur Don Panoz liked to win on the race track and he did plenty of that. Panoz died at 83.

He is widely given credit for expanding the options for race fans while also giving a start to a number of significant drivers.

Panoz stepped out of a number of his race-based business ventures early in the decade but, as the DeltaWing project demonstrated, he couldn’t completely step away. He toyed with the idea of building an all-electric prototype to race at the 24 Hours of Le Mans, and even after that project folded he turned to a more conventional powertrain to drive the Avezzano GT4 front-engine racer that debuted in the Pirelli World Challenge Series last year.

There were few signs that, despite advancing age, Don Panoz was ready to quit. But, earlier this year, he was diagnosed with pancreatic cancer, a rarely-curable disease that took his life on Tuesday.

It was, however, about as full a life as one could imagine.

(To see more about the history of the DeltaWing, Click Here.)

“I close my eyes 15 minutes every day and dream of the impossible,” he once told Richard Dole, a former photographer for the Panoz team, who wrote a remembrance for Automobile magazine.