“What was once dismissed as a Rust Belt relic has become relevant all over again.” 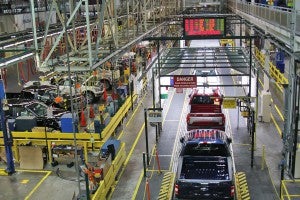 The Rouge plant produces a new F-Series pickup, on average, every 53 seconds.

Ford Motor Co. will launch production of an all-new hybrid version of its F-150 pickup for the 2020 model-year at its sprawling River Rouge Complex near Detroit.

The announcement came at a day-long event called to celebrate the centennial of what was once hailed as the “American alter to the new god of mass production.” Commonly known as “The Rouge,” it was the brainchild of company founder Henry Ford and, for many years, the largest automotive manufacturing center in the world, renowned for its ability to take raw materials off ships and railroad cars at one end and spew out completed cars and trucks at the other.

Today, the Rouge has been somewhat downsized, some of its original operations closed, while others, such as its steel plant, have been sold off. But with 93 buildings covering a roughly 1.5 square-mile campus, its own docks and 100 miles of railroad track weaving through the complex, the Rouge remains one of the industry’s largest automotive manufacturing centers. And it is the primary production site for Ford’s various F-Series pickups which have, for decades, collectively been the country’s best-selling automotive product line.

As the new millennium approached, the odds that the Rouge would make it to 100 seemed far from likely. The facility was run down, heavily polluted and inefficient, but when Ford company planners suggested shutting it down and setting up a new complex elsewhere, “I told them, ‘Hell, no,’” recalled Bill Ford Jr., the great-grandson of Henry Ford and the carmaker’s executive chairman. 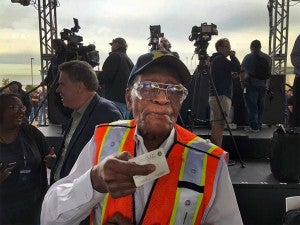 Willie Fulton Jr. shows off his Ford ID which reveals he started working at the Rouge in July 1953.

Instead, the company in 2000 launched a modernization plan meant to turn the Rouge into a clean and efficient showcase. Key facilities, including the vehicle assembly plant, were rebuilt from scratch. One of the most notable features was the addition of a “living” roof, a variety of plants used to both absorb rainwater and provide natural insulation that reduced the need for heat in the winter and air conditioning in the summer.

There were other major changes, including the installation of hundreds of robots. “Back then, it was all muscle. There were no robots. Now you have to think about what you’re doing on the line,” said Willie Fulton Jr., as he waited for the Thursday celebration to begin.

With a broad smile revealing a row of missing teeth, Fulton reached into his wallet to pull out his Ford ID card, proudly pointing out the date he first came to work, July 15, 1953. Recently celebrating his 65th year at the complex, he continues to get up every morning in time to be out the door and at his post by 5 AM. He spent most of his career at the steel plant. These days, he’s an automation attendant, working with robots “that didn’t exist back then.” 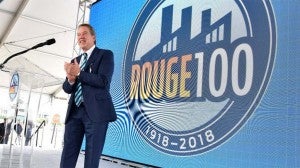 Even before Fulton was hired, the Rouge had a substantial history. It took a decade to fully complete it, but Ford caught the tail end of the “War to End All Wars,” rolling out a handful of Eagle-class ships for the military. It was even more active in the Second World War, producing a wide range of materiel, including tanks and engines. By then, however, there’d already been some major fights at the Rouge itself.

Little more than an hour away, the United Auto Workers Union scored a major victory with the sit-down strike at a key General Motors plant in Flint, Michigan over the winter of 1936-37. But Ford continued to hold out, and on May 26, 1937, thugs hired by the company’s founder confronted and beat up UAW organizers, including founder Walter Reuther on a bridge entering the complex. What became known as “the Battle of the Overpass” was caught on camera and following a widespread public outcry, Henry Ford gave in.

His great-grandfather “thought he could provide more for the workers than the union could,” Chairman Bill Ford said Thursday morning. “He was wrong.”

(Ford promises to be more transparent about its turnaround. Click Here for the latest.) 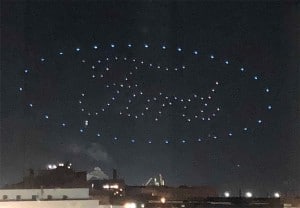 Today, among those carmakers represented by the UAW, Ford is generally considered to have the most positive working relationship, something that has helped it largely avoid strikes for the last several decades.

But there are far fewer workers on hand at The Rouge than in Henry Ford’s day. At its peak, the complex employed about 130,000 people, about 30,000 more than the carmaker employs in the entire U.S. today. Back then, the Dearborn campus had a maintenance staff of over 5,000, or roughly the same size as the Rouge complex’s assembly plant employs today.

The numbers are a bit misleading. Where Henry Ford turned raw lumber, iron and sand into completed cars almost entirely on-site, the vast majority of components used in today’s F-150 are shipped in from outside suppliers. Some run their own operations alongside the Rouge, delivering parts just as they are needed by the line, often in precisely the sequence they will be fitted into new vehicles. That’s one reason the factory is able to roll out a new F-Series every 53 seconds on a 24-hour daily schedule. 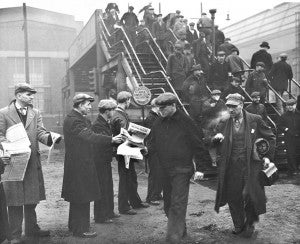 UAW organizers passed out leaflets at the Rouge ahead of the Battle of the Overpass that won the union a place on the line.

With the decision to produce the new hybrid version of the F-150 in Dearborn, Ford is clearly showing its commitment to maintain the complex that started operations just 15 years after the carmaker was founded.

Details haven’t been released but Ford’s chairman hinted that the new model will be a conventional hybrid with a battery-boosted drivetrain that “will take you further without sacrificing power.” That will be critical if Ford hopes to continue producing the F-Series as federal mileage standards continue to be ramped up. As a further incentive for commercial users, the hybrid system will also serve as a generator to provide power at a worksite.

If it can generate sales, it should be able to keep the Rouge plant running well into its second century.