Volkswagen unveils Beetle Final Edition, with "no immediate plans" for a replacement. 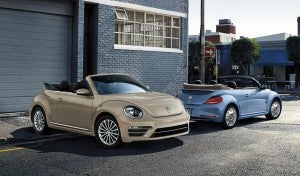 The last of the VW Beetles come in two "final edition" colors and styles, including convertible models.

The end is near – for the Volkswagen Beetle, that is, the automaker all but confirming rumors that 2019 will mark the last time the once wildly popular little car will roll off an assembly line.

Also known in various places as the Bug, and even the Kafer, it has had an incredible run, with only a brief stretch out of production, the Beetle has been a fixture on the road since 1938, when it was unveiled as part of Adolph Hitler’s plan to create a “people’s car,” or “volkswagen,” that was cheap and easy to produce. With nearly 22 million build since then, it is the longest-running model ever, though Toyota’s Corolla claims to beat it as the best-selling nameplate in automotive history.

“The loss of the Beetle after three generations, over nearly seven decades, will evoke a host of emotions from the Beetle’s many devoted fans,” said Hinrich J. Woebcken, president and CEO, Volkswagen Group of America Inc.

But while Woebcken said that “there are no immediate plans to replace it,” he added that “I would also say, ‘Never say never,’ pointing to the revival of the once-legendary VW Microbus, which will return as the battery-electric ID Buzz in a couple years.

The Beetle, in its various forms, traces the history of Volkswagen AG and, in many ways, Germany itself.

It originally was meant to put a nation suffering through a disastrous depression on wheels. Production was halted as the Nazis shifted the country’s economy to a war footing. And it nearly vanished in the ashes of the Third Reich. It was only because of the dedication of a British Army officer, who discovered a damaged Beetle in what was left of VW’s Wolfsburg assembly plant that the Beetle – and Volkswagen itself – went back into business. 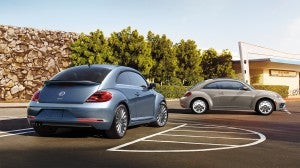 The Beetle has been around for three generations and seven decades.

The car was one of the first from Germany to land on U.S. shores following the Second World War and, in something of an irony, it become a symbol of the anti-war 1960s-era hippie counterculture. At their peak, American sales totaled about 400,000 annually.

By the late 1970s, however, the Beetle was losing its luster, aging Baby Boomers turning to the more fuel-efficient, and higher-quality, Japanese models flooding the market. VW tried replacing the Beetle with the more modern Rabbit – the Golf in most other markets – but it never recaptured the Bug’s earlier success.

By the end of millennium, demand was marginal, at best. It vanished from the U.S. and Europe, production of the original Beetle sputtering to a stop in Brazil.

But it received a reprieve when, in 1997, Volkswagen introduced the New Beetle. At a splashy launch party in Atlanta, VW’s then-CEO Ferdinand Piech tried to pick up on the evening’s retro them by wearing a peace symbol – putting it on upside-down.

(Click Here for more about VW’s concepts brought to U.S. version of Worthersee.)

The New Beetle never came close to matching the original car’s popularity. It was all but ignored in Germany and largely connected with Americans looking for a niche retro-mobile.

It lasted until 2010, VW the following year debuting a complete makeover which tried to find a balance between retro and macho-modern, keeping the New Beetle’s half-moon silhouette while pushing the nose out a little further. Even with more power and features it didn’t help and demand continued to tumble. 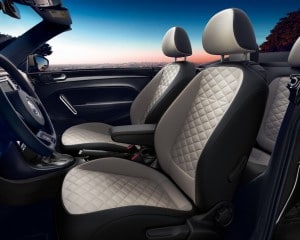 The interior of the Final Edition convertible Beetle.

VW has been signaling for several years that the Beetle wouldn’t be around much longer.

The Final Edition will be offered in both coupe and convertible body styles, and in both SE and more well-equipped SEL trims. Two unique colors, Safari Uni and Stonewashed Blue, will be added to the standard paint options.

There will be some distinctive body details, including chrome trim and body-color side mirrors. The SEL models will get bi-xenon headlamps, along with LED running lights and taillights. A “Beetle” badge will replace the “Turbo” nameplate, meanwhile. And there will be unique wheels on both SE and SEL trims.

All of the 2019 Final Edition models will be powered by a 2.0-liter turbocharged inline-four making 174 horsepower and 184 pound-feet of torque, the engine paired with a six-speed automatic.

(To read about our driving impressions of the 2019 VW Jetta, Click Here.)

For those who keep hoping that the Beetle will rise from the dead once again, the guessing game seems to be leaning towards the possibility that a future model would follow the same route as that of the reborn Microbus. And considering Volkswagen’s newfound emphasis on electrification, perhaps a battery-electric version might someday be in the cards.