BMW Fills in the Blanks on New Z4

Production will launch with four-cylinder version, but I-6 and M packages will follow. 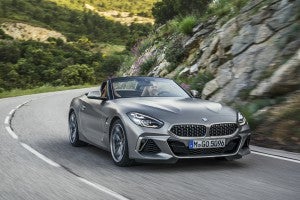 The 2019 BMW Z4 revs up the excitement for the next-gen roadster with more power and plenty of style.

Nearly a month after giving us a first look at the all-new BMW Z4, the Bavarian automaker is filling in some critical blanks, offering timing on the rollout of the new roadster, as well as specs on the first two versions in the pipeline.

First unveiled during the annual classic car week in Pebble Beach, California, the new Z4 is seen by many as the most significant update since the nameplate was first launched 17 years ago. That is, in part, due to the unusual approach BMW took to develop the all-new Z4, partnering with Toyota which will use the underpinnings for its own new entry, the reborn Supra.

The good news is that the next-generation Z4 will be offering more power than the outgoing roadster. The bad news, at least for fans of rowing their own transmission, is that there’ll be no manual offered on the new model.

That move appears to reflect the automaker’s diminished aspirations for the new Z4. Just as with sedans and coupes, demand for sports cars and roadsters has been tumbling. And, even among those buyers still looking for a ragtop like the BMW Z4, fewer and fewer are checking off “manual transmission” on the option list. Perhaps the real blame belongs to the fact that today’s automatics are simply too good, in many cases offering faster shifts, quicker 0 to 60 times and better fuel economy. 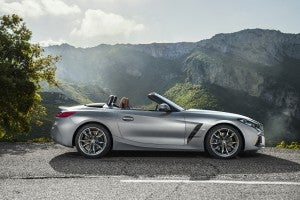 A closer look at the new Z4 reveals that it has grown in most key dimensions, adding 3.3 inches in length and 2.9 inches in width.

Whether that will scare some potential buyers away from the new Z4 remains to be seen, but it appears there are plenty of things that could keep customers interested.

The rollout of the new roadster will begin next March when the 2019 BMW Z4 sDrive30i rolls into showrooms. It will feature a 2.0-liter TwinPower turbocharged inline four making 255 horsepower and 295 pound-feet of torque. That’s 15 more ponies and 35 more lb-ft of torque than the outgoing ragtop. An eight-speed automatic will pump that power to the rear wheels. BMW claims the 2019 Z4 30i will be able to hit 60 in 5.2 seconds.

This isn’t a full M model, but the M40i should still be able to win over those who want more pep and handling out of the little two-seater. To start with, it gets a 3.0-liter turbocharged inline six pumping out 382 hp and 369 lb-ft. That’s a full 47 more ponies than the old M edition, and it will get you to 60 in just 4.4 seconds. The M40i, meanwhile, will share the base Z4’s eight-speed automatic. 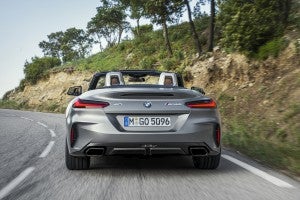 The M40i, meanwhile, gets an adaptive M Sport suspension, along with M Sport differential and M Sport brakes.

A closer look at the new Z4 reveals that it has grown in most key dimensions, adding 3.3 inches in length and 2.9 inches in width. It’s a half-inch taller than the outgoing roadster, and the track is 2.45 inches wider up front and 3.86 inches in the rear. But the wheelbase has shrunk by an inch.

Working with Toyota, BMW opted for a double-joint spring strut front suspension – something that should seem familiar to 3-Series owners. In the rear, it opts for a five-link design. The M40i, meanwhile, gets an adaptive M Sport suspension, along with M Sport differential and M Sport brakes. Those are also available as options on the sDrive30i.

The cabin now features a more lavishly executed mix of materials, the M40 offering an optional package featuring leather and Alcantara in Frozen Gray. The driver will be looking at a 12.3-inch reconfigurable digital instrument cluster. Atop the center console, a 10.25-inch infotainment touchscreen operates the seventh-generation BMW iDrive system.

(What happens when you already have an X1 through X7? BMW looks for still more SUV opportunities. Click Here for more.)

Expect to see pricing of the sDrive 30i shortly before it goes on sale next March. The Z4 M40i will debut as a 2020 model.