President's position could trigger yet another tit-for-tat trade war. 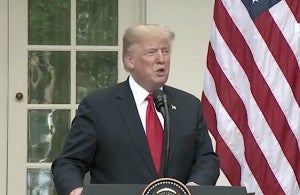 In turn, EU President Jean-Claude Juncker now warns that Europe will respond in kind if Trump follows through with threats to tag vehicles from brands like Audi, BMW, Jaguar and Mercedes-Benz with duties that could run as high as 25%.

The question observers are now asking is why the White House would reject an offer that would effectively drop the EU’s barriers to entry for American-made vehicles, something Trump cited in the first place as the reason why he would threaten to trigger a trade war with one of America’s biggest trade partners.

The dispute has been simmering for some time, then-candidate Donald J. Trump making automotive trade a cornerstone of his 2016 campaign for the White House. He escalated matters over recent months, at one point telling French President Emmanuel Macron he was considering steps that would effectively block Mercedes – and other European vehicles – from coming to the U.S. entirely.

While it was unclear how Trump might accomplish that, he indicated he was ready to enact new tariffs of up to 25%, and ordered Commerce Secretary Wilbur Ross to investigate whether foreign-made vehicles posed a threat to national security, something that would allow a president to act unilaterally, rather than having to win approval from Congress. 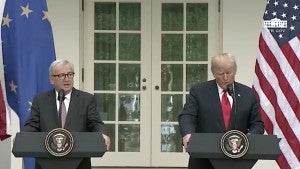 EU President Jean-Claude Juncker warned Trump if he raises tariffs further on European-built vehicles, the EU will match in kind.

Though Trump moved forward with new tariffs on imported aluminum and steel, along with broader duties on Chinese goods, he agreed in July to hold off on any new tariffs on European products while negotiators discussed ways to ease trade tensions.

Since then, several automakers, including Volvo, as well as government leaders like German Chancellor Angela Merkel, have proposed the option of eliminating auto tariffs entirely, a position EU officials have taken more broadly. But Trump appears to be shooting that offer down.

“It’s not good enough,” he told the Bloomberg news service when asked about the EU’s proposal. “Their consumer habits are to buy their cars, not to buy our cars,” he added, suggesting that when it came to unfair trade practices “The European Union is almost as bad as China, just smaller.”

(Click Here for details about why new vehicle costs are expected to rise under new NAFTA deal.)

Trump, if anything, escalated the potential for a global trade war, during the Bloomberg interview suggesting he might pull out of the World Trade Organization, the body set up to arbitrate trade disputes, if “they don’t shape up” and take positions more favorable to the U.S.

Why Trump pushed back on the auto tariffs offer is unclear. One industry observer contacted by TheDetroitBureau.com suggested the U.S. actually might not like to see auto trade barriers completely eliminated.

“People forget we have a 25% ‘chicken tax’ on imported pickups,” said the source, asking not to be identified by name. “Eliminate that and you threaten the biggest source of products Detroit has.”

Europe could come up with a response to Trump’s position on auto tariffs in the coming days, following a series of meetings between Germany’s Merkel, EU President Junckers and France’s Macron.