Tesla Stock Rises and So Does the Controversy Around It

Tesla CEO Elon Musk's plans to take the company private have it facing a class-action suit and 4.36% jump in its stock price.

As the Saudi investment fund that Tesla CEO Elon Musk suggested could provide the funding necessary to take the EV maker private is in talks to invest in another EV maker – Lucid Motors – Tesla’s stock shot up more than 3% early in the day.

After taking a hit the last few days, the stock turnaround comes on news Morgan Stanley withdrew its rating on Tesla, suggesting that some sort of deal is in the works and the bank has agreed to help make it happen. 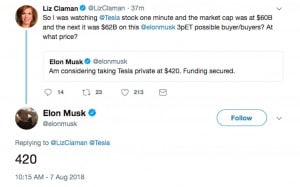 No day at Tesla is simple and today was no exception. The stock price jumped in spite of the news that PIF, the aforementioned Saudi investment fund, was potentially ready to drop a big money on Lucid as well as having a new class action suit filed against it.

Bernstein Liebhard LLP, an investor rights law firm, filed a securities class action lawsuit “on behalf of those who purchased or acquired the securities of Tesla, Inc. (“Tesla” or the “Company”) (NASDAQ: TSLA) between August 7, 2018 and August 14, 2018.”

The lawsuit, which expands the class period asserted in recent lawsuits filed against the Company concerning Tesla’s proposed “going private transaction,” seeks to recover Tesla shareholders’ investment losses. The suit alleges that investors were harmed by Musk’s tweet and that he knew the information he put out in the tweet wasn’t truthful.

The Securities and Exchange Commission is already investigating the actions by Musk, but the focus of the query – and the lawsuit – essentially settles on two words “Funding secured.” Musk said in his tweet about the plan to take the company private, he had the billions of dollars he would need to execute the plan in place — he did not, according to an interview he gave to The New York Times.

According to a press release put out by the firm, potential litigants have until Oct. 9 to add their names to the pool. As Musk waits with bated breath to find out if the Saudis will buy in, it was determined that another Norway’s $1 trillion wealth fund could remain an investor in Tesla if it does go private. 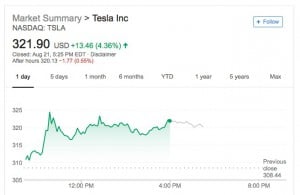 Tesla stock finished today 4.36% on a mixed bag of news.

Typically, according to Trond Grande, deputy CEO of the Norwegian fund, it doesn’t remain in an investment that goes from public to private; however, rules regulating the fund set by the Norwegian Finance Ministry and parliament do allow it to stay on in a listed company that goes private.

“The priority is to try to preserve the value for the fund. That is the priority,” Grande told Reuters. “If that means that the fund will be invested in a company that has been delisted for a period of time, that could happen. But as a main rule, we will exit the investments as and when, or soon after, it has been taken off an exchange.”

Something that may give the Norwegian fund some comfort is that Musk won’t be running the company in radio silent mode. SEC rules, according to a CNN report, would require him to continue to report regularly to the agency. If a private company has more than 300 investors, which Tesla does by thousands, it’s required to continue reporting — which may not alleviate the short-term pressures Musk hopes to escape with his plan.

Is Apple CEO Tim Cook considering investing in Tesla? With $267 billion in cash, Apple could afford it.

Musk has spoken recently of the tremendous pressures he feels on a regular basis to meet the short- and long-term goals of the company. Some have suggested he could use a hand running the day-to-day operations, which he’s done at SpaceX.

In the right circumstance, that could come in a two-for-one deal as one Tesla bull told Bloomberg today that Apple CEO Tim Cook would be an ideal fit.

“If you look at actually what Elon’s problems are every day, they are operational, which is why Tim Cook was hired by Steve Jobs back in the day. Cook is perfect for this role,” Gerber said. “In the past Apple and Tesla probably wouldn’t have gotten along because Musk didn’t need Apple, but it is clear he needs help.”

Plus, Apple has $267 billion in cash on hand, more than enough to acquire Tesla, and has been working on Project Titan, its own autonomous EV, for some time now. The brain power and synergies gained from Apple investing in Tesla are mindboggling. Apple officials haven’t made any comments implying there was an interest in investing in Tesla earlier.