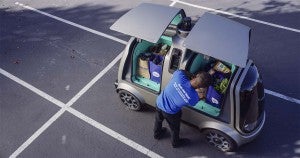 The Kroger project won't completely solve the "last mile" challenge. Customers still will have to go out and grab their bags from the delivery vehicle.

While it may take some time before you can hail a driverless ride-sharing vehicle, you may soon be able to have your groceries delivered autonomously – at least if you live in certain parts of greater Phoenix.

Kroger has teamed up with Nuro, a self-driving tech firm to launch a trial grocery delivery program in one part of the Southwest community, and could roll it out to other parts of the country if it proves successful. The move comes shortly after rival Walmart announced a similar pilot program pairing it with Google’s autonomous vehicle spin-off Waymo.

(Amazon will now deliver goods to your car, as well as your home or office. Click Here for the story.)

The program will be centered around one Kroger outlet, Fry’s Food Store, in Scottsdale, Arizona, and serve homes in the 85257 zip code on the south side of Scottsdale. Customers will pay a flat $5.95 delivery charge for the service. 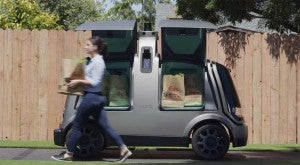 Initially, Kroger will rely on modified Prius hybrids but it plans to switch to the fully driverless Nuro R1.

Initially, the pilot program will rely on a small fleet of Toyota Prius hybrids modified to operate using Nuro’s self-driving technology. There will be backup “operators” onboard, however, ready to take control in the event of an emergency.

But the goal is switch over to the customized R1 delivery van Nuro unveiled at the Consumer Electronics Show in Las Vegas last January, perhaps as early as this autumn, if it can complete final certification with the state of Arizona.

“Arizona is home to some of the most innovative autonomous vehicle testing,” Nuro Co-Founder Dave Ferguson said, adding that, “Our goal is to save people time, while operating safely and learning how we can further improve the experience.”

(Smart car technology could cause, as well as prevent, crashes, IIHS warns. Click Here for more.)

The Phoenix area, in particular, has become Ground Zero in the push to develop autonomous and fully driverless vehicle technology. Waymo, the Alphabet Inc. subsidiary, has been operating a pilot ride-sharing service in the community and recently won approval to turn it into a commercial venture. Initially, Waymo has been relying on modified versions of the Chrysler Pacifica Hybrid minivan using backup operators but it soon plans to make them fully driverless. Waymo has announced plans to greatly expand its fleet of Pacifica minivans and will add Jaguar I-Pace electric SUVs, as well. 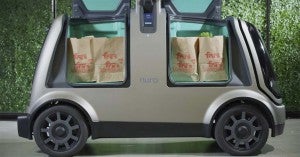 The Kroger project will initially center around one store in Scottsdale and target one zip code.

The Google spin-off, meanwhile, recently announced that it is partnering with Walmart in Phoenix. But instead of bringing groceries to customers it will shuttle shoppers to Walmart stores to pick up pre-bagged groceries.

The Kroger and Waymo pilots attempt to address one of the biggest challenges retailers face as they explore ways to compete with online challengers like Amazon and as they push to reduce costs by getting drivers out of the picture for delivery services. Often referred to as the “last mile” challenge, retailers need to find a way to actually get goods into the hands of customers if there’s no one in the truck to trundle up to the front door or into the office building.

The Kroger project will alert customers when the delivery vehicle is set to arrive and they will have to then go out and grab their bags. That’s similar to the process used when Domino’s, the big pizza chain, partnered with Ford Motor Co. on a driverless delivery program near its headquarters in Ann Arbor, Michigan. Customers received text messages with a code to enter into a panel on the side of modified Ford Fusion sedans to open up a door to a warming oven holding their food.

The Waymo/Walmart project doesn’t attempt to directly address the last-mile problem though it could eventually be used to bring goods to customers.

Mercedes-Benz recently participated in a project in Switzerland in which goods were flown from a Sprinter van to a customer’s front door using one of two drones docked on the vehicle’s roof.

While the Phoenix area is witnessing major developments in the use of autonomous and fully driverless vehicles it has also seen the downside of piloting such technology on public roads. In March, a Volvo SUV modified by Uber struck and killed a pedestrian in the suburb of Tempe. The crash appears to have been caused by faulty sensors, though the human backup operator was distracted and failed to intervene.

The ride-sharing service briefly shut down its autonomous research program, though it recently resumed testing in Phoenix. But Uber has shuttered it driverless truck program, Otto, and is facing pressure from investors to close or sell off its autonomous vehicle program, as well.

(Why did Uber shut down Otto? Click Here to find out.)