Company planning a three-row sport-ute too. 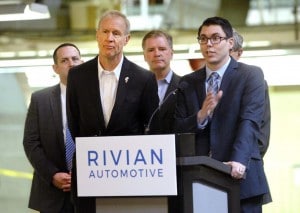 R.J. Scaringe, right, is ready to roll out a new pickup truck and three-row sport-utility vehicles.

Rivian, a California-based start-up company looking moving into a space coveted by Tesla, is planning to show off a battery-electric pickup truck and a three-row sport utility vehicle at the Los Angeles Auto Show in November.

R.J. Scaringe, Rivian’s founder and chief executive officer, said during a recent appearance in Detroit that the introduction will change the perceptions of EVs. The auto industry is on the verge of sweeping change. “Think about the tech industry in 1991,” he added.

By the time, Rivian, which has raised $500 million in capital, launches in 2020, with a target of building 50,000 vehicles annually at the plant in Normal, Illinois, that it acquired from Mitsubishi.

“There is no consensus,” on what the ‘mobility’ industry will look in the future,” Scaringe said. “We’re only at the beginning of the journey. Periods of uncertainty also create opportunity.” He noted that no one could was predicting the demise of Blockbuster and Sears in the early 1990s or the rise of Amazon, which was launched in 1994.

(Byton looks to make a place at Pebble Beach. Click Here for the story.) 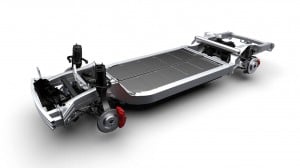 Rivian's pickup and sport-utility, as well as future products, will be based off this skateboard.

To prepare for the introduction and launch, Rivian has brought in Michael McHale, a veteran communicator who helped build the program that turned Subaru into a powerhouse in the years after the Great Recession, to serve as the director of communications.

Scaringe said Rivian plans to launch an all-electric five-passenger pickup truck in 2020 followed by a seven-passenger SUV. The company has said the vehicles will cost between $50,000 to nearly $100,000.

The two vehicles being readied for their debut in Los Angeles this fall ride on “skateboard” that will include the large battery pack that Scaringe said will give the Rivian vehicles a range of 450 miles. The vehicles will also go from zero to 60 in three seconds and will work better off road than a Jeep or a Land Rover, he said.

Rivian is also in the process of planning to build four other vehicles from the same platform.

Rivian also is hoping to share its platform with other vehicle builders. The platform was created with the intent that it could also serve as underpinnings of a self-driving, autonomous vehicle, which promises to change the industry dramatically.