Could Ford Be Working Up a Sub-Ranger Pickup?

One option would be to go with a car-based package. 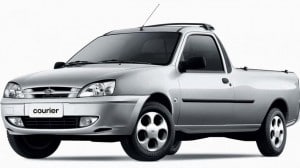 Several sources are reporting that Ford Motor Co., long reluctant to undercut its full-size F-Series pickup family, could soon have small trucks in its line-up, with a model even smaller than the upcoming Ranger to follow by as early as 2022.

Exactly what it would look like and where it would fit into the spectrum isn’t clear but Automobile magazine’s sources suggested Ford might be looking at a product like the old Courier pickup built in Brazil that was based on the same platform as the prior-generation Fiesta subcompact.

Whether there’d be a market for something the size of the old Ford Courier is far from certain, though several automakers appear to be looking at their options, notably including Hyundai which has been slowly moving forward with a production version of the well-received Santa Cruz concept first shown at the Detroit Auto Show in January 2015.

Were Ford to go with a sub-Ranger offering, it would almost certainly find a broader audience outside the United States, several analysts told TheDetroitBureau.com. American buyers still tend to prefer full-size trucks, though the ongoing resurgence of the midsize pickup segment provides some hints that there could be demand for even smaller models. 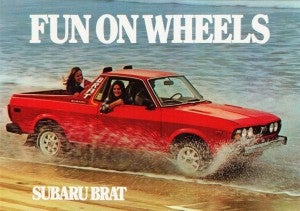 The old Subaru Brat had broad appeal to young buyers on a tight budget.

Pickups, in general, have seen a big surge in sales over the last several years, and not just in the U.S. But full-size models are largely an American phenomenon, with a handful of secondary markets, such as the Middle East.

Up until mid-decade, in fact, it seemed like the mid-size truck market was losing what little momentum it had left, at least in the U.S. General Motors abandoned the segment, as did Fiat Chrysler. Honda pulled the plug on the first-generation Ridgeline. And, even though it was working up a new version of its long-lived Ranger, Ford’s plan was to offer it pretty much anywhere but the U.S.

The number two Detroit carmaker only reversed course a couple years ago, rushing to put together an American version of the Ranger after watching midsize sales rebound with the arrival of the all-new Chevrolet Colorado and GMC Canyon siblings.

Of course, “midsize” is a relative term. The two GM offerings are substantially bigger than earlier versions bearing those nameplates. In fact, they’re pretty much on a par with the Chevy Silverado and GMC Sierra “full-size models of just a couple decades back. That will hold true for the reborn US. Ranger when it reached market in early 2019.

Pricing doesn’t leave much of a gap, either. A base Colorado comes in around $22,000, with the Silverado starting at less than $30,000. The next Ranger, Ford has signaled, could have even less of a gap when compared to the F-150.

When the Baby Boomers were just getting their first set of wheels, manufacturers used what were then compact pickups to offer an affordable ride, models like the Subaru Brat serving as popular alternatives to otherwise bland econobox sedans.

Hyundai could soon bring a downsized truck to market, a production version of its Santa Cruz concept.

The challenge for a manufacturer like Ford would be to not only design a downsized pickup but find a way to bring it in at a substantially lower price than current midsize offerings. That’d be no easy task, and the option to go with an import would be limited.

Since the mid-1970s, pickups have been subject to a 25% import tariff known as the “chicken tax,” a reference to the trade war with France and Germany over American poultry that resulted in the added duties. The exception would be to produce such a vehicle in Mexico, though even that loophole could be closed as Pres. Donald Trump pushes to renegotiate the North American Free Trade Agreement.

(Detroit automakers could come out losers if Trump scuttles chicken tax. Click Here for the latest on the auto tariff battle.)

Any future compact truck would almost certainly shift to a unibody platform, according to industry analysts, much like the old Courier and the reborn Honda Ridgeline. While that might not connect with serious truckers it could provide a way to bring down costs. That’s a key reason Hyundai is going that route with the Santa Cruz.

A Ford official noted that the company hasn’t produced the Brazilian-made Courier pickup since 2013, having replaced it with the global version of the Ranger.

That said, spokesman Mike Levine left the door open, emailing a statement to TheDetroitBureau.com that noted, “While we don’t comment on speculation about future products, we are significantly expanding our North America lineup with all-new vehicles and entering new segments with fresh designs and white space silhouettes that will position us for even more growth.”

If Ford does have a pint-sized pickup in the works, sources say, it likely wouldn’t reach showrooms for at least another three years.