With AMR, Aston Rapide Gets a Little More Rapid

205 mph sedan is fit for street or track. 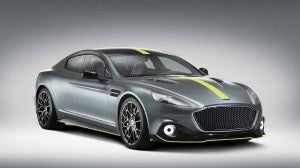 The Aston Martin Rapide AMR was first shown as a concept at the Geneva Motor Show.

Aston is no slouch when it comes to performance, but it’s in the midst of amping things up another notch with the help of its motorsports operations, Aston Martin Racing.

Appropriately, fast on the heels of the new DB11 tune-up, it’s pulling the covers off the Rapide AMR, a production version of the concept first shown at the 2017 Geneva Motors Show. If you happened to get a look at the prototype, it turns out, you’ll have a good idea what will soon be hitting the street – and the track, as many buyers will likely be finding ways to push the performance version of Aston’s sedan to its limits.

The new performance models, Aston explained in a statement previewing the Rapide AMR, “draw a direct engineering and aesthetic link between the company’s successful race team and its road cars. As such the Rapide AMR is a sports car capable of comfortably transporting a team of race drivers to a circuit on the other side of a continent and then tackling the track when they get there.”

The Aston Martin Rapide AMR harkens back to classic models of the past in that its powered by a naturally aspirated 6.0-liter V-12, here making a blistering 580 horsepower and 465 pound-feet of torque. That’s 20 more ponies than iin the previous, top-line Rapide S, and it will readily launch you from 0 to 60 in just 4.2 seconds, Aston claims, adding that its top speed is now boosted to 205 mph. 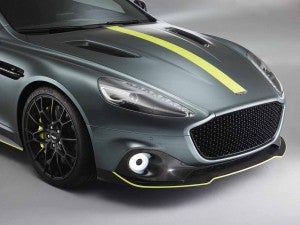 As you’d expect of any good European performance model, however, the Rapide AMR is about more than just straight-line acceleration. So, Aston has also lowered the suspension by nearly a half-inch and retuned the sedan’s adaptive suspension.

“The three stage adaptive dampers remain,” from the standard-issue Rapide, Aston explains, but “they have been thoroughly reengineered to create a car that is more focused, agile and dynamic. Much of this development work has been completed at the newly opened AMR Performance Centre at the Nürburgring.”

The Rapide AMR borrows heavily from the styling tweaks we saw on Aston’s original Geneva concept. That includes the oversized grille and functional vents on the carbon-fiber hood. That big V-12 needs lots of air for breathing and cooling. Most of the other revisions to the body are meant to enhance aerodynamics, both to make the Rapide AMR more slippery and to reduce lift. The new splitter, sills, rear diffuser and boot lid lip spoiler are also done up in carbon fiber, by the way. 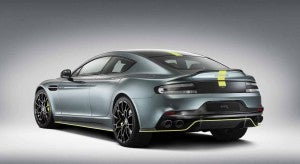 Those carbon ceramic brakes are the most powerful ever for a Rapide, measuring 400 mm up front, with six piston calipers and 360mm at the rear with four piston calipers

(To check out the all-new Aston Martin Vantage, Click Here.)

Look for the 2019 Aston Rapide AMR to roll into U.S. showrooms by the fourth quarter of the year. But you may have to look hard, as the British luxury marque plans to produce just 210 to be divided up among global markets.