Toyota Latest to Push Into Ride-Sharing 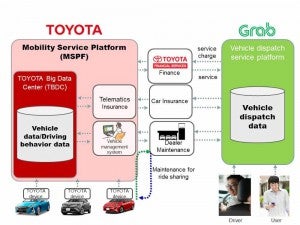 Toyota will join a growing list of automotive manufacturers, including General Motors, Volkswagen, Ford and Fiat Chrysler, making bets on the anticipated explosion in ride-sharing services.

The Japanese giant plans to invest $1 billion in Grab Taxi Holdings Inc., a Singapore-based technology company operating ride-hailing services in places like Malaysia, Indonesia, Thailand and the Philippines. Originally launched as a taxi company, it is now positioning itself as a regional powerhouse after acquiring Uber’s Southeast Asian operations earlier this year.

For its part, Toyota was a relative latecomer to emerging mobility services, including ride-sharing and self-driving vehicles. But it has launched a number of investments during the last several years, both in the form of outside alliances and by setting up its own technology subsidiary, the Toyota Research Institute, or TRI.

This marks the largest-ever investment by an automaker in a ride-hailing company, Grab noted Wednesday.

(SoftBank invests $2.25B in GM’s autonomous tech. Click Here for the story.)

Cruise Automation's technology will allow GM to field a fleet of autonomous Chevy Bolt EVs that may be used by Lyft.

Founded six years ago, Grab initially positioned itself as a taxi operator, but it has moved into more high-tech operations, notably smartphone-based ride-hailing, with operations in all eight of the countries in the Southeast Asian region.

Toyota is just the latest to pump money into Grab. It has also received investments from Japanese tech fund SoftBank, as well as Didi Chuxing, the Chinese ride-sharing company that bought out Uber’s holdings in that country last year.

In the strange-bedfellow world of mobility services, companies often maintain ties to multiple partners and erstwhile competitors. SoftBank, for example, just announced a $2.25 billion investment in General Motors’ autonomous vehicle service, Cruise Automation. Cruise, in turn, is developing driverless ride-hailing vehicles that could eventually be fielded by both GM’s Maven service, as well as Lyft.

Uber, meanwhile, maintains a 27.5% stake in Grab after the sale of its Southeast Asian operations.

Ride-hailing services are generally operating in the red at the moment, largely due to the cost of expanding their operations. But they are also struggling to find a formula that works long-term, and many analysts and investors anticipate that will only happen once fully driverless vehicles prove safe and effective. That would eliminate the single-largest cost faced by services like Grab and Uber: the driver.

In turn, by slashing prices, ride-hailing companies are expected to significantly expand their business. A study released last December by the Boston Consulting Group estimated that a quarter of the miles Americans travel on the road in 2030 will be in driverless ride-sharing vehicles. Other markets are expected to see similar shifts, especially in crowded areas like China, Japan and Southeast Asia.

But that is expected to cut into retail sales for automakers like Toyota, GM and VW. They appear to be hedging their bets by forming alliances with ride-hailing services that could eventually become their single-largest customers.

Fiat Chrysler Automobiles last month announced that it would sell up to 62,000 of its Chrysler Pacifica Hybrid minivans to Waymo. The Google spin-off is setting up its own, self-driving ride-sharing service that will go into commercial operation later this year.

Toyota has not yet said if it plans to supply the autonomous vehicles being developed by TRI to Grab.