Automakers expect half of its line-up will be plug-based by 2025. 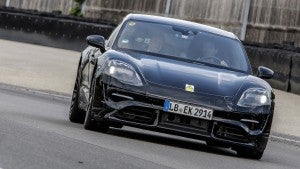 Porsche's Mission E all-electric vehicle gets a name now: Taycan. Pronounced tie-con, the new model is still going to through some tests as shown here.

Porsche’s Mission E battery-electric vehicle has a new name. It will now be called “Taycan,” which the German automaker says is the term for a “lively young horse,” in Turkish – and a reference to the horse on its corporate crest.

The new model, which is set for release early in 2019, will be Porsche’s first all-electric model, but clearly not its last, a senior company official indicating plug-in hybrids and all-electric models, like Taycan, are expected to generate half of the brand’s sales by 2025.

The Porsche Taycan will be part of a wave of new all-electric luxury and performance vehicles set to come to market between now and the end of the decade that will take direct aim at Tesla. Jaguar is just launching its first battery-electric vehicle, the I-Pace SUV, with Audi following this year with its own BEV, a variant of its popular Q5.

“Our new electric sports car is strong and dependable; it’s a vehicle that can consistently cover long distances and that epitomizes freedom,” said Porsche AG chief Oliver Blume in a statement.

Pronounced “tie-con,” the Mission E is the first all-electric Porsche, though not the first to be able to plug in. In fact, the legendary Ferdinand Porsche’s first vehicle was a plug-in hybrid, the Lohner-Porsche Mixte, first shown in 1899. 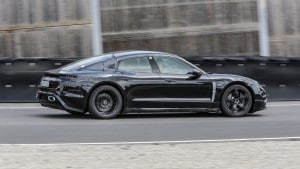 The new Porsche Taycan will arrive sometime next year and will do the zero-to-60 mph sprint in less than 3 seconds.

The company that bears his name has, in recent years, introduced a variety of hybrid and plug-in models, including its most powerful model ever, the 918 Spider. But the Taycan takes things a big step beyond.

It relies on two electric motors, one on each axle, generating a combined 600 horsepower. That will help it launch from 0 to 60 in an estimated 3.5 seconds. Top speed is rated at 155 mph.

Off-the-line, that actually won’t quite keep up with a Tesla Model S sedan with optional Ludicrous Mode. It can hit 60 in the low two-second range. But Ludicrous Mode can only be used with a relatively full battery and, even then, only a handful of times per charge. The Tesla also has a tendency to have its batteries and motors heat up when driven to the limits, so it cannot be driven flat-out for an extended period of time. Porsche, however, claims the Taycan will be able to be driven much like any of its other models, such as the classic 911, a driver pushing the limits at will.

Porsche hasn’t yet provided specific details of the battery pack, but it is believed to be sized somewhere in the range of 90 to 100 kilowatt-hours based on the sports car’s extended range. It will get about 300 miles per charge using the EPA test cycle.

(Click Here for an early look at the Mission E Cross Turismo.)

A battery of that size will likely take a dozen hours or more to charge up using a standard, American-styled 240-volt home charger. But the carmaker claims that can be trimming to 15 minutes for an 80% top-off, or 240 miles, using the latest fast-chargers. 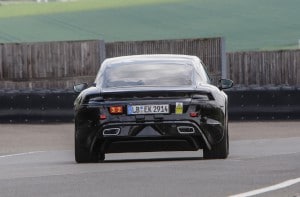 The new Taycan can be charged to 80% in 15 minutes using a high-speed charger.

Porsche is working with its U.S. dealers to put 500 of those systems in place by their showrooms. Its parent, Volkswagen AG, is developing an even more extensive network of standard and quick chargers as part of a settlement with U.S. and California regulators in the wake of its diesel emissions cheating scandal. In Europe, meanwhile, VW has entered a partnership that includes rivals BMW and Ford to set up high-speed chargers across the Continent.

While Taycan will become Porsche’s first all-electric model, it isn’t going to be its last. The automaker has been hinting it is working on other projects, part of the VW Group’s goal of having more than 50 BEVs on the road by the middle of the coming decade.

“We anticipate roughly half of our vehicles sold by 2025 will be plug-in hybrids or battery electric vehicles,” Klaus Zellmer, the head of Porsche’s U.S. subsidiary, told USA Today. “Which leaves the other half for internal combustion platforms. So, while some things change, others do not, and a Porsche will always be a Porsche.”

(To see more about how dealers are hampering EV sales, Click Here.)

The push into electrification should come as no surprise. Porsche, like the rest of the industry, is facing stiff new emissions and mileage regulations around the world. That includes China, which is now the world’s largest luxury car market, and which recently enacted specific mandates encouraging the sale of zero-emission vehicles.