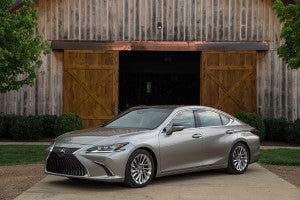 The new Lexus ES is bigger, more powerful and has more tech than its predecessor.

Lexus has built its reputation on the quality, reliability and durability of its luxury cars and utility vehicles. But now, with the new vehicles such as the ES, Lexus is reaching out to match its German and Japanese competitors in styling and overall performance.

For one thing, the new 2019 ES 350 is impressive looking all the way around. The new exterior sheet metal is clean and gives the car a sportier and more up-to-date appearance that should wear well over the years. The front fascia on the new 2019 Lexus ES also more refined and just looks better than the previous generation and car just looks handsome when it is sitting at the curb or in motion.

Each of the three variants of the ES – the standard, the new F-Sport and the hybrid – are separated by design details but overall the differences, to my eye, are relatively minor.

On the inside, the design of the ES stresses comfort, ease of access to the car’s technology and luxury appointments. Going back 30 years, the interiors of Lexus sedans have always seemed to have an edge on their rivals and all three variants of the ES carry on the tradition. The noise in the cabin is minimal and the materials used throughout the interior space are first-rate and nicely assembled.

(Lexus isn’t about to give up on cars. Click Here for the story.)

The seventh generation ES also has slightly more interior space than its predecessors and the designers have used the extra room to make the rear seat more spacious. But the extra space also makes the entire cabin seem roomier when you are spending any length of time in the car. 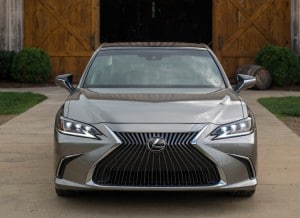 The 2019 Lexus ES is wider and longer providing for a larger, more comfortable interior.

The Lexus Multimedia System sits high on the dashboard in a position that minimizes distraction. Measuring eight inches wide on standard models and 12.3-inches wide with the available Navigation package. There is also a readable head-up display to help the driver keep their eyes on the road and to reduce fatigue. Amazon Alexa is part of the package as well.

The latest version of the ES also incorporates and new chassis, suspension and steering layout that gives all three variants more spirit out on the road.  The ES F-Sport, which is equipped with an active variable suspension that makes the car more athletic, had a nice firm and supple feeling during my drive through the lush green, rolling countryside east of Nashville where the car seemed quite at home.

The ES F-Sports driving dynamics overall are very good thanks to changes in the electric power steering, which give the driver more feedback and better feel of the road.

The changes in the ES 350s driving dynamics are supported by the all-new Global Architecture–K platform that is longer by 2.6 inches, lower and wider by 1.8 inches. In addition, the wheels that have been pushed closer to the corners thanks to a two-inch longer wheelbase and wider tracks front and rear, giving the ES the proportions that reflect its added capability.

The 2019 ES 350s is powered by a 3.5-liter V6 with fuel injection that uses high-pressure injectors to deliver fuel directly into the combustion chamber that delivers 302 horsepower and 267 lb-ft of torque. Both numbers are up significantly – 34 horsepower and 19 foot-pounds of torque – compared with the previous V6 and the preliminary fuel-economy numbers are pegged 22 mpg city, 33 mpg highway and 26 mpg in combined driving.

The front-wheel drive ES is also equipped with an 8-speed automatic transmission, however, all-wheel drive is not yet available, though Lexus engineers said they were considering it. While some of the newer 8- and 9-speed transmissions have occasionally had difficulties, the 8-speed shifted smoothly and precisely during my time in the car. 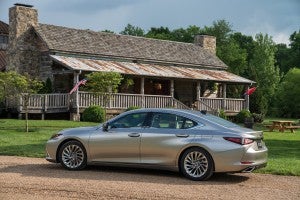 The new Lexus ES sedan is on par with its German counterparts.

A new, fourth-generation Hybrid Drive System is used in the ES 300h with a 2.5-liter engine is also available in the revamped ES line. The preliminary internal numbers on the hybrid are a combined 215 total system horsepower and a manufacturer estimated 44 combined mpg.

The seventh-generation ES features Lexus Safety System+ 2.0 as standard equipment. Already one of the most sophisticated systems of its kind, LSS+ 2.0 adds new capabilities that further expand the scenarios and the range of speeds in which it is designed to provide additional safety to the driver and passengers.
An example of such a feature is daytime bicyclist detection which is part of an enhanced Pre-Collision System.

(To see more about Lexus betting big on the new ES, Click Here.)

The competition in the so-called “Near Luxury” segment is quite intense since its populated by cars such as the Mercedes-Benz C-Class, BMW 3-Series, Audi A4 and Acura TLX in a world dominated by SUVS. But roomy, powerful sedans still have a lot a sex appeal and the ES 350 certainly fits the bill.