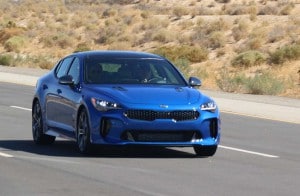 The Kia Stinger GT1 shows the automaker is looking to attract attention with its designs and products.

Cars of various kinds have come to seem kind of ordinary or even passed their prime even though still much go and fit anywhere 99% of motorists go day in and day out with a minimum fuss and great efficiency.

But they are also kind of boring, which is one of the primary reasons buyers have moved toward the compact two-box SUVs that have become so popular during the past couple of years.

The Kia Stinger, however, is one car that doesn’t try to hide the fact it is a car and is certainly anything but humdrum. Indeed, the Stinger is quick, cleverly packaged so it doesn’t feel cramped when you are sitting in the driver’s seat and comes with all kinds amenities, including up-to-date technology and as well as convenience-oriented features.

In addition, it also fulfills the first duty of any small car, it’s great fun to drive anywhere and even matches up well with a pretty impressive list of competitors such as the Audi A5, BMW 4 series and the Infiniti Q50. 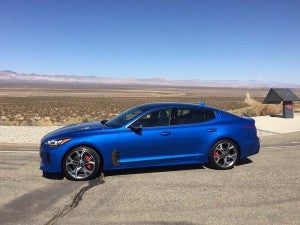 The 2018 Kia Stinger adopts a classic, rear-drive, GT look with its long nose and short overhangs.

The Stinger looks great. From front to back, the it has sleek, highly stylized exterior that conveys the car’s power and sophistication. The strength starts in the front with the tightly crafted grille, headlamp treat and fascia that are both distinctive and functional by helping bolster the cars aerodynamics.

Along the sides, the Stinger carries a minimum or ornamentation back to the sheet meet over the rear wheel, which is curved to give the car muscular-looking shoulders and a neatly tailored rear deck that slants away from the tapering roof. The overall appearance is both graceful and powerful and the conveys the carefully balanced proportions of a car designed around a rear-wheel-drive layout

On the inside, the cabin is comfortable, and the simple layout of center console and instrument panel seems to open up space in the interior so the drive doesn’t seem pinched, which is one of mistakes that the designers of so-called driver-oriented cockpits seem to make It also very well equipped with dual-zone climate controls to go along with the adjustable seats, push button start, 720-watt Harmon Kardon sound system and on-board navigation in the center stack.

In the Kia, the driver’s position is laid out in a way that gives the driver plenty of visibility and makes the car easy to control, making the vehicle most satisfying to drive and all kinds of conditions such as intense rain. The wheel base on the Stinger is also longer than that of the Audi A5 or BMW 4-series, which serves to make it roomier even in the rear seat where the roof being to slant into the rear deck. 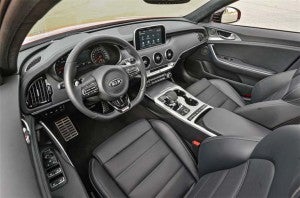 Inside the Kia Stinger GT1.

The Stinger’s also has excellent driving dynamics during tight maneuvers or at speed. The suspension on the Stinger is first rate, offering the driver ample stability at all times. The electric-powered steering also quite precise and the brakes have more than enough stopping power. In fact, Kia points out that the brakes on the Stinger GT1 that I drove are larger than those on the Audi A5 or Lexus GS.

The Stinger GT1 that I got to drive was also equipped with a 3.3-liter-V6 engine with an eight-speed transmission and all-wheel-drive system. The driver also can select the drive mode but I found the Stinger was very quick from a standing start regardless of the mode in which it was placed. The car seemed to rocket away from stoplight or around slower moving vehicles on the freeway with the lightest touch on the throttle.  Basically, the Stinger really does have a whole lot of zip.

In addition to Bluetooth, Android Auto and Apple Car Play and a satellite radio link, the Stinger also comes with a full complement of driver assistance technology that should, in theory, help enhance the protection the car provides the driver and passengers beyond that offered by the multiple air bags and standard seat belts.

(To see more about Kia bolstering its line-up with launch of new Rio GT and Ceed models, Click Here.)

I thought the Stinger’s layout and appearance were terrific and the car was a lot of fun to drive. But I did have to wonder with its price tag of $47,450 with the extras even before the $900 destination charge if it would ever find the kind of buyers who would really appreciate it the most.