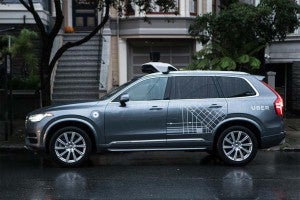 Uber has scaled back its autonomous vehicle program after one of its self-driving vehicles killed a pedestrian in Arizona in March.

But one of its major rivals for ride-sharing dollars around the world appears to be charging ahead.

Didi Chuxing, the China-based ride-hailing service that bought Uber’s business in China last year, obtained a permit to test autonomous vehicles on public roads in California. Didi is the latest to join the growing list of companies developing self-driving vehicles in the state but perhaps one of the most significant because of the company’s huge presence in China, the world’s largest ride-sharing market, and its potential global reach.

As of May 10, 53 companies held permits from the California Division of Motor Vehicles to test self-driving cars on public roads in the state, making it the most concentrated hub of autonomous vehicle research and testing activity in the world.

Didi’s permit puts pressure on rival Uber, which halted all testing after one of its vehicles a pedestrian in a Phoenix suburb this past March. The National Transportation Safety Board is investigating the crash.

Uber has said it is cooperating with the NTSB in its investigation and has initiated a “top-to-bottom safety review” of its self-driving vehicles program. Uber has hired former NTSB Chair Christopher Hart to review and advise the company on its overall safety culture.

The permit issued by the State of California comes on the heels of the opening of Didi Labs, the Chinese ride-sharing firm’s new research and development center in Mountain View, California.

Didi has invested in a number of companies outside of China. But the R&D center is the first of its kind outside of China. Didi also has yet to venture into the U.S. market with its actual ride-hailing service.

(To see more about how autonomous EVs will drive down ride-sharing costs, Click Here.)

But Didi has began offering its service in the Mexican city of Toluca, the company said, setting up a potentially costly battle with Uber in a key Latin American market on doorstep of its rival’s base in the U.S.