Subaru Moves into New US Headquarters 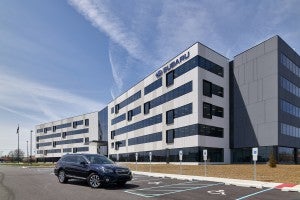 Subaru cut the ribbon on its new headquarters building in Camden, New Jersey.

Subaru of America Inc.’s new home is Camden, New Jersey, a town that has seen more than its share of hard luck over the years, but perhaps more importantly it’s not Atlanta, which has seen plenty of auto companies set up shop there.

At 250,000 square feet, the new headquarters will more than double the size of the automaker’s previous headquarters and bring employees from four sites onto one campus, which will house more than 550 Subaru employees.

The move comes just days after the company sold its 9 millionth car in the U.S., a 2018 50th Anniversary Edition Crosstrek, delivered to Dr. Hershey Garner in Fayetteville, Arkansas. Garner is a repeat Subaru buyer and currently owns a 2005 Baja.

The company developed the all-new $118 million corporate headquarters in order to bring together much of its local workforce and provide them with a leading working environment, which it hopes will help spur even more growth. The development of the follows Subaru’s nine consecutive years of record sales and 10 years of consecutive growth. 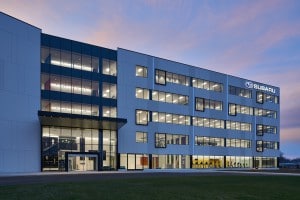 Unlike some automakers that have moved their U.S. headquarters to Atlanta, Subaru remained in New Jersey.

“We are very happy to mark the conclusion of our fabulous new headquarters,” said Thomas J. Doll, president and CEO, Subaru of America Inc.

“Our move to Camden is the next chapter in the long-term future of Subaru in the Delaware Valley. We have called this place ‘home’ for 50 years and we are thrilled that we will continue to be a part of the local community we have supported for so long.”

Construction of the new Subaru headquarters also underscores the stability of U.S. automotive market since the recession. In March, Mercedes-Benz opened a new headquarters in Atlanta and the Ford Motor Co. is on the verge of undertaking a major real estate development in Detroit and General Motors has plans for rebuilding its storied design center in Warren, Michigan.

Subaru of America announced plans in 2014 for a new headquarters campus to be located in Camden. To further fortify the company’s commitment to its community, Subaru will donate 50 cherry trees to the City of Camden. In Japanese culture, cherry blossoms represent both the fragility and the beauty of life and are symbolic of new beginnings.

(Click Here for more about Subaru wanting sales to do more than set records.) 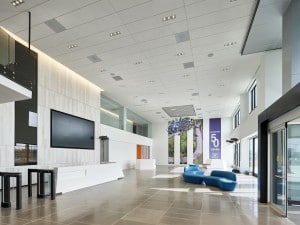 The interior of Subaru's new headquarters features bright colors with an abundance of natural light.

The entire Knights Crossing development, upon completion, will consist of 1.4 million square feet of innovative office, full-service amenities, ample public greenways and will ultimately be served by two sources of public transportation.

A second building, called the National Service Training Center (NSTC), will open late-Summer 2018. The building will house service training, along with a service engineering shop and other product engineering. The Eastern Regional Sales office and Philadelphia Zone office will occupy a second floor at the building. Service training is currently being performed at a nearby facility in South Jersey.

Subaru of America was founded in 1968 in Philadelphia and has been based in the Delaware Valley for 50 years. Subaru has had its corporate headquarters in New Jersey since 1969 and had been in its Cherry Hill location since 1986.

Meanwhile, Subaru of America, Inc. reported a 1.5% increase compared with April 2017, and the best April in the history of the company.