Hypermiling Tesla Model 3 Sets Two Records – Only One By Choice

Battery sedan more than doubles rated range – but at an unexpected cost.

Two hypermilers set a new record of more than 600 miles on a single charge in a Model 3.

Even for those with a lead foot, Tesla’s products are nothing less than impressive, particularly when it comes to range. Where most battery-electric vehicles bragged about topping 100 miles per charge, Tesla’s Model S topped the 200 mark right out of the box, and the latest P100D version can readily manage 300 before having to plug back in.

But a pair of hypermilers wanted to see just how far they could push things with the new Tesla Model 3 equipped with an optional 75 kilowatt-hour battery pack. During a sometimes boring, sometimes grueling run last week, they managed to set an all-time record of more than 600 miles on a charge.

The downside? Once they finished up, Sean Mitchell and Erik Strait were surprised to discover that they couldn’t charge up their Model 3 again. Tesla plans to look into the situation to see if it can explain what happened.

In an era when miles per gallon has become, for many folks, more important than miles per hour Hypermiling has become something of a competitive sport, whether you’re talking about all-electric models, conventional hybrids, or even muscle cars. But range has become an especially important topic in the emerging electric vehicle market. 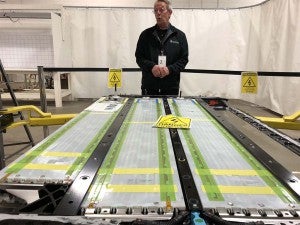 The battery pack is one place where Tesla has clearly set an industry benchmark.

A decade ago, getting even 75 miles per charge was considered impressive, and the first generation of so-called mass market battery-electric vehicles, like the Nissan Leaf and Ford Focus Electric, could barely nudge the 100-mile mark. Tesla immediately blew through that barrier, the original Model S with a 60 kWh battery pack pushing into 200 mile territory.

Since the first sedan was delivered in mid-2012, Tesla has steadily increased the size of its battery options, and the Model S P100D can top 300 miles – unless you’re the type of performance driver who spends a lot of time in the optional Ludicrous Mode.

But Mitchell and Strait were convinced they could push the larger pack well beyond, targeting 600 miles on a single charge. Of course, they stacked the deck a little bit, laying out a closed loop near Denver Airport. The roughly mile-long course varied a mere 10 feet in elevation and with the thin air of the Mile High City they also could count on reduced aerodynamic drag.

But the project also required a bit of personal sacrifice. The two co-pilots maintained a relatively steady 20 to 30 miles per hour, a speed that required them to travel in circles for 32 hours. When it was time to eat, they used a fishing net to snag burritos. And, well, we’ll avoid the subject of bathroom breaks. But there were some other personal challenges, as well.

Two hypermilers squeezed more than 600 miles out of a single charge on a Tesla Model 3.

Squeezing every last mile out of the battery pack required avoiding the use of comfort features like air conditioning and, at one point, the temperature inside the Model 3 rose to a blistering 108 degrees – since opening the windows to cool off would have created additional wind drag.

(Click Here for more about how dealers are hampering EV sales.)

In the end, after 32 hours, Mitchell and Strait blew through their target, managing to clock 606.2 miles before the battery died, beating what website Electrek reports was the previous record of 560 miles.

They pulled over, plugged the sedan in and set off to celebrate. But the party didn’t last long. After a 24-hour recharge they discovered the Model 3’s battery was still down at zero. Why isn’t clear, though it is possible they simply drained the batteries further than they’re designed to go. Lithium-ion packs generally don’t like to drop below a certain level.

But there are a number of other reasons why the pack may have “bricked,” or permanently lost the ability to recharge. One question is whether the two co-pilots might have hacked the Tesla’s controlling software in order to go the distance. That could have overridden software built into the sedan’s control system meant to protect the batteries.

With the Memorial Day holiday, the record-setting sedan had to be parked to wait for Tesla technicians to show up, Mitchell tweeing, “I’ve been assured the best hands will look into (it).”

For its part, Tesla has not yet responded to a request for comment. We’ll update the story when we hear from the automaker.

(To see more about Elon Musk striking back after tough reviews of the Model 3, Click Here.)

In the meantime, the Memorial Day drive helped demonstrate just how much energy can be squeezed out of a lithium-ion battery pack. But it also serves as a warning to not try this at home.