Needs of owners will lead to customization of self-driving cars. 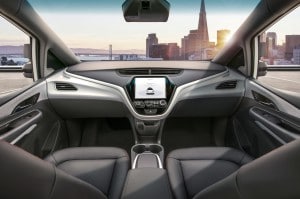 GM's Mike Abelson suggested that self-driving cars, like the Cruise AV, could be redesigned to customer wishes in the future.

Automakers appear to have moved on from if they can produce self-driving vehicles to what might they look like once the technology is ready — and if one automaker is correct, the sky will be the limit.

And to put a twist on an old phrase, you’ll get to pick the color of the sky in your world, according to Mike Abelson, GM vice president of global strategy. Speaking at Citi’s Car of the Future conference in New York City.

These designed-by-you vehicles might be owned or leased by individual customers, Abelson noted, adding that he sees a market outside of large cities where ride-sharing services, like Uber or Lyft, may not available.

He envisions the price of self-driving cars coming down enough for it to make sense for someone in a rural area buying a vehicle to make it easier to get around, such as seniors or those who may be physically challenged.

Cruise Automation introduced its third-gen automated vehicle. They will be part of the new New York City fleet.

These vehicles could also end up as part of peer-to-peer sharing services, much like Tesla and a few others have now. Getting a vehicle on demand, but not wanting to take on the entire financial obligation of such a vehicle may accelerate the development of these vehicles.

Currently GM is examining its line-up to see what models make sense as self-driving vehicles, Abelson noted. He also believes that the needs of ride-sharing entities will help drive the revamping of cars as we know it.

To some extent, this has already occurred with GM as it begins to use Chevy Bolts for its driverless fleet of taxis. Going forward, the needs of the user will be applied to customize vehicles and one of the first things that will get scrapped are the steering wheel and other controls to allow for more room and more configurations.

John Hoffecker, vice chairman of consultants AlixPartners, told Reuters that the early leaders will also shape the market, and determine where and how the profits will be made on these vehicles. These companies, Waymo, GM and Tesla, will also help determine the popularity of these vehicles.

Ride sharing business is expected to drive down the cost of self-driving cars in the future, Abelson said. GM and others have suggested for some time now that the relationship between automakers producing self-driving cars and ride-sharing companies would be symbiotic.

Lyft, which GM holds an ownership stake in, and Uber have been working on the development of a autonomous vehicle for years. Waymo is actually offering rides in self-driving Chrysler Pacificas.

Hoffecker told Reuters costs are “going down dramatically,” to the point where individuals should be able to buy self-driving cars by 2023–25.