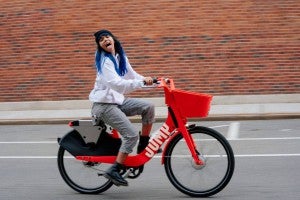 With Uber’s latest acquisition, the odds of any company executive getting into an argument with the driver is unlikely as the company has acquired bike-sharing service Jump. Terms of the deal were not released.

Jump is a “dockless” bike, which means users can leave them in any bike stand – as opposed to a branded stand – and they’ll be disabled until the next user comes along to rent it. The rider gets a code on their smartphone to activate the bike.

The move pushes Uber closer to its goal of reducing car ownership, according to CEO Dara Khosrowshahi in a blog post.

“We’re committed to bringing together multiple modes of transportation within the Uber app — so that you can choose the fastest or most affordable way to get where you’re going, whether that’s in an Uber, on a bike, on the subway or more,” he wrote in a blog post. 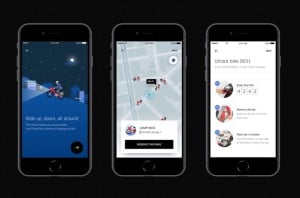 Uber users can now order a Jump bike through the Uber app.

The move puts Uber into the bicycle business in a big way as Jump reports it has more than 12,000 bicycles in 40 cities across six countries in 2017. Rentable bikes are trending as several start ups across the country are now offering scooters or bikes for rent.

They are particularly popular on college campuses and the towns adjacent to or part of the university or college. They also offer an inexpensive way of filling the gap between public transport, i.e. trains and subways, and home.

However, they do come with some negatives, such as the fact they can be left anywhere causing congestion and clutter on local bike racks, according to critics. Jump recently began offering custom-designed electric bikes, in San Francisco, where Uber has been testing the service through its app.

Uber declined to provide details on plans to expand Jump bike-sharing or pricing plans. For now, the bikes cost $2 for 30 minutes of use. Users typically have a membership but pay-as-you-go accounts aren’t unusual.

Jump CEO Ryan Rzepecki, who incorporated the company in 2010 and launched its first pilot a few years later, said the company’s brand will live on.

“We will remain good partners to cities while delivering excellent service to our riders,” he said in a blog post. “Together with Uber, I firmly believe we can make a more significant impact on the world and shift millions of trips from cars to bikes.”

The U.S. had 55 bike-sharing systems with 42,000 bikes in 2016, according to the National Association of City Transportation Officials. The largest were New York’s Citi Bike, Washington D.C.’s Capital Bikeshare, Miami’s Citi Bike, Chicago’s Divvy and Boston’s Hubway, according to USA Today.