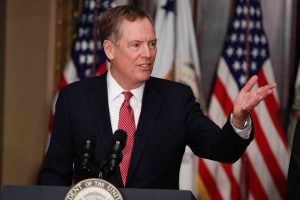 U.S. Trade Representative Robert Lighthizer and his team are pushing ahead in NAFTA talks despite President Trump's criticism of the pact.

As the Trump Administration’s NAFTA negotiation team continues to try to hammer out a deal, making incremental progress, the president appears to want to hamstring the group at every opportunity.

Just yesterday it was revealed that U.S. trade negotiators reduced their demand for regional auto content to 75% from the 85% they demanded originally. Eduardo Solis, the head of Mexico’s automotive industry association, confirmed the move today.

However, speaking at the White House Thursday, President Trump told reporters he’s willing to “renegotiate forever,” as he tries to secure terms that are better for the automotive industry. The terms include an increase in North American content required in new vehicles now.

If the drop to 75% is true, it puts a deal within shouting distance as currently the required content is 62.5%.The president said renegotiation of the North American Free Trade Agreement with Canada and Mexico is progressing well but there isn’t a timeline for reaching a deal. 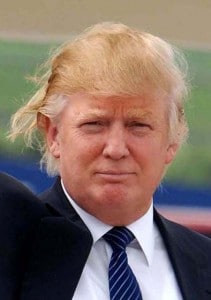 Trump continues to be critical of NAFTA despite investigating re-entering the Trans Pacific Partnership.

This statement may be part of the president’s negotiation tactics, largely because the uncertainty of talks is discouraging investment outside the U.S. “As long as we have this negotiation going, nobody’s going to build billion-dollar plants in Mexico,” Trump said.

Despite his bluster over the jump in content levels, automakers have been imploring the president to leave NAFTA largely unchanged, including the content rules which automakers believe cannot be attained.

Trump’s bluster about waiting out Mexico and Canada comes as he appears to have reversed course on the Trans Pacific Partnership. In order to calm the nerves of U.S. farmers, President Trump is examining what it would take for the U.S. to re-enter the TPP.

(Click Here for more about NAFTA talks likely to resume in May.)

The U.S. president regularly singles out the auto sector as a victim of NAFTA, saying on Thursday Mexico had “taken our auto industry by the throat.” However, automakers have regularly pushed Trump to leave NAFTA largely untouched.

“We’re going to make it great and we’re pretty close to a deal. It could be three or four weeks, it could be two months it could be five months, I don’t care,” he said during the discussion.

“So the narrative of I’m pushing for a deal — I never push for a deal. I don’t care. In fact, if everybody in this room closed their ears I’d say that I’d rather terminate NAFTA and do a brand new deal but I’m not going to do that because I’d rather everybody to be happy in this room, okay? So, we’ll see how it goes.”

The U.S. ambassador to Canada, Kelly Craft, said Thursday in Calgary she’s optimistic Nafta can be fixed and the three nations will be able to modernize the decades-old deal. “We all want a good outcome, and if our past is any indication, I’m confident that we’re going to have a very bright future.”