VW’s I.D. Vizzion Concept Could Change the Way We Travel

Rethinking what an autonomous and electric vehicle could offer. 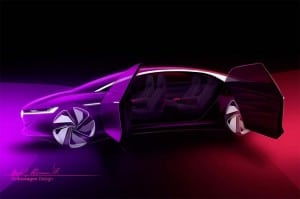 It’s become something of an industry mantra that the automobile will change more in the next five years than it has in the last 50, and you need only walk into your nearest showroom to see that this is more than hype. Manufacturers already are rolling out what will soon become a flood of electrified vehicles and there are now at least a half-dozen models with significant, semi-autonomous capabilities.

What comes next? Volkswagen has been offering up some intriguing hints with a series of concept vehicles previewing the launch of its new, electrified brand-within-a-brand, and it will debut the fourth prototype, the I.D. Vizzion, at the Geneva Motor Show next week.

The German automaker is already offering a few intriguing teaser images, as well as a short video that puts some perspective on the Vizzion. You can Click Here to check it out on YouTube. But to sum it up, the I.D. Vizzion concept vehicle illustrates what motoring might be like in an age of zero-emission, always-on Level 5 autonomous vehicles.

We’re getting a lot closer than you think. For its part, Volkswagen has committed to launching dozens of pure battery-electric vehicles into its global fleet by 2025. And the I.D. Vizzion is based on the same, modular MEB platform that most of those upcoming production vehicles will use.

(Diesel crisis may have been just what VW needed, suggests U.S. CEO. Click Here for the story.) 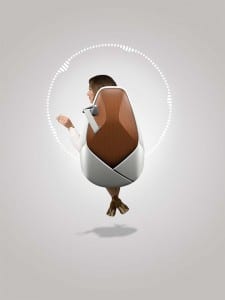 The seat for the I.D. Vizzion helps the driver better operate the vehicle in all modes.

As for self-driving capabilities, VW’s sister brand Audi already offers on its newest A8 the ability to drive virtually hands-free in traffic. And Waymo, the Google spinoff, was recently given the go ahead to launch a driverless ride-sharing service in Phoenix. These and other upcoming systems will have their limitations. But most experts now anticipate that so-called Level 5 autonomy, where a vehicle could operate driverlessly under all conditions and at all times, is likely no more than a decade or so away.

Ride-sharing services are counting on that, and we’ve seen plenty of prototypes – such as the toaster-like Toyota e-Palette prototype that debuted at CES in January – that blend mass and personal transportation. Some studies predict millions of motorists will give up their personal vehicles once this technology comes online.

But they might not have to. The I.D. Vizzion appears to be aimed at individual buyers who might like the idea of switching between manual and fully autonomous modes. While there’s plenty to enjoy driving on open roads, that reflects the everyday reality for most Americans. Does anyone really enjoy creeping along in stop-and-go traffic?

Adding autonomous capabilities is only the starting point for VW, however, the I.D. Vizzion takes advantage of the ways that designers and engineers might be able to radically reshape the interior of an electrified and self-driving vehicle. In fully autonomous mode that could mean transforming the cabin into a mobile lounge or office with the sort of seating you’d love to have at home.

At more than 201 inches in total length, a production version of the Vizzion could slot in as a replacement for VW’s old Phaeton model. In concept form it features rear “suicide” doors and it lacks a conventional B-pillar, so you would enter it much like a living room, slipping into one of the four plush seats. 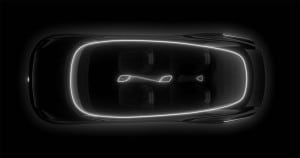 The I.D. Vizzion is Volkswagen's fourth prototype in the I.D. line-up.

The concept appears to have no steering wheel, pedal or conventional dashboard, but several manufacturers have already shown concept vehicles where controls retract when they operate in driverless mode. So, the possibility is the I.D. Vizzion, in production, could allow manual driving, when desired.

Then again, as the maker’s YouTube video points out, more than 40,000 Americans were killed on the nation’s highways last year. Many proponents believe that by going to full autonomy that could drop to near zero.

As for the mechanicals, VW has dropped a few details, such as the Vizzion’s use of a massive 111-kilowatt-hour lithium-ion battery pack. That, it said, would be enough to deliver 413 miles of range. And with two motors – one on each axle – delivering a combined 300 horsepower, Vizzion should be reasonably quick, as well.

(To see more about a study seeing 21 million autonomous vehicles on the road by 2035, Click Here.)

We’ll be looking to find out more about the concept and how it might fit into VW’s long-term plans next week. But considering the company has already confirmed plans for early I.D. concepts, such as the Buzz electric microvan, we’d be surprised if it the Vizzion won’t return in some form in the years ahead.